In 2017, eyes turned to the ‘800lb gorilla’ in global fixed income markets – large US corporations that, flush with cash, ploughed offshore profits back into government and corporate debt.

This cluster of firms – a group including Facebook and Microsoft – had found efficient ways of booking intangible IP assets offshore which they then turned into (mostly) US assets. This was, and remains, a stratified space – as Credit Suisse’s Zoltan Pozsar noted in 2017, the top 10 holders of offshore portfolios controlled the majority of that particular asset universe. Chief among them was Apple, which held almost $300bn in its behemoth offshore bond portfolio as of Q4 2017. This was almost one-third of the $1tn in investable offshore cash.

The size of these companies’ holdings made them an important captive buyer in US Treasury and corporate bond markets, putting them almost on par with the fabled ‘reserves manager bid’ that hoovered up sizeable US fiscal deficits in the years before and after the 2008 financial crisis. Similarly, they were an important player in the corporate debt market, where almost half of holdings were located. Their scale and clout meant that changes in investment behaviour could significantly impact conditions in key US debt capital markets. 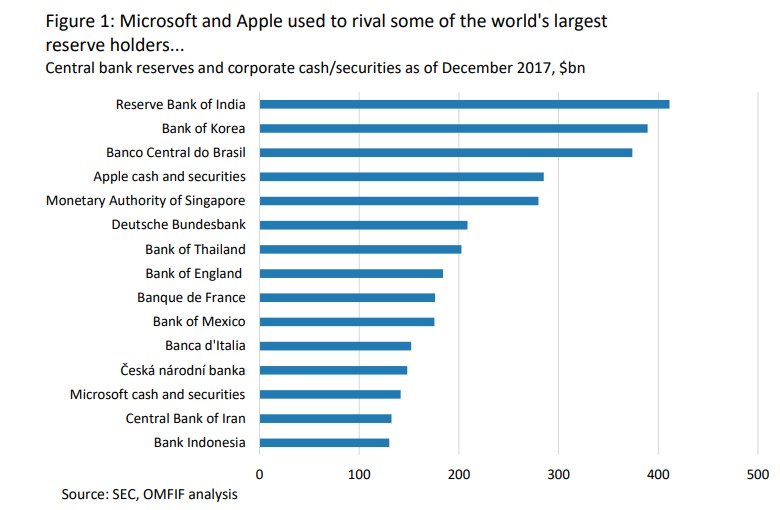 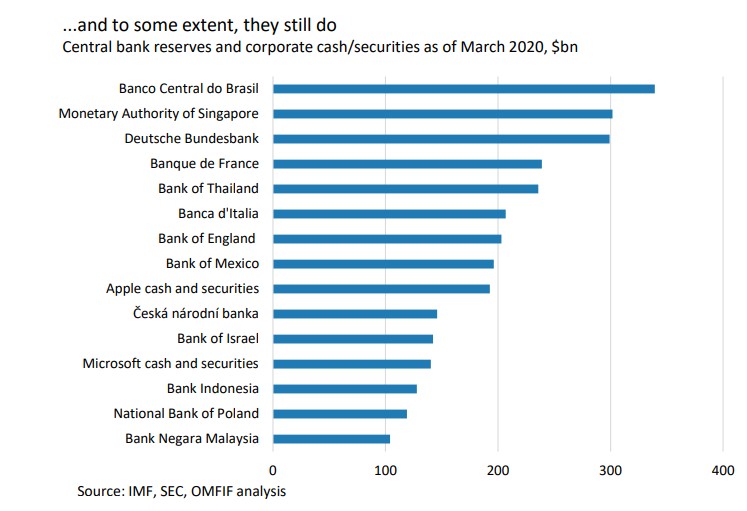 Since their peak roughly at the end of 2017, the size of these offshore portfolios has begun to wane. As of April, Apple’s savings portfolio is down to a mere $190bn, while Cisco’s is down to $18.2bn from more than $60bn in late 2016. The reasons for this steady decline are largely regulatory. Specifically, the Trump administration’s early efforts at corporate tax reform encouraged a moderate repatriation of offshore savings; in other words, a wave of bond sales, the proceeds of which were then used to fund things such as mergers and buybacks. 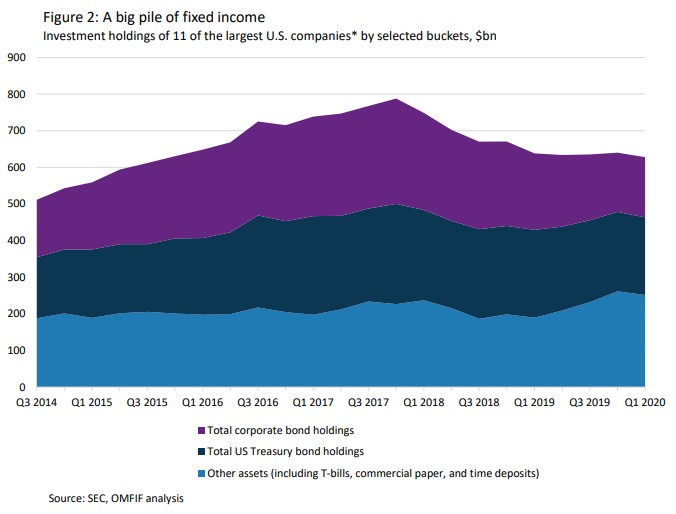 However, they have by no means become insignificant, and the chart above shows they are still larger than in the third quarter of 2015.* Corporate treasurers retain the ability to sway conditions in key markets.

Their role has taken on a renewed importance given the mass issuance of global government and corporate debt sparked by the pandemic shock. Central banks have done their best to keep spreads down and will most probably continue to do so into the medium term. As US economist Brad Setser has outlined, the Federal Reserve’s gargantuan Treasury purchases in March and April effectively offset the massive dollar sales by foreign reserves managers during the same period. Corporations contributed to the March sell-off in Treasuries, as the steep decline in the Irish Treasury International Capital figure shows (figure 3). This can be considered a proxy for the offshore holdings of corporates, much like the Cayman Islands figure is viewed as a proxy for hedge funds – the March TIC figures fit nicely with the hedge fund deleveraging that took place that month. 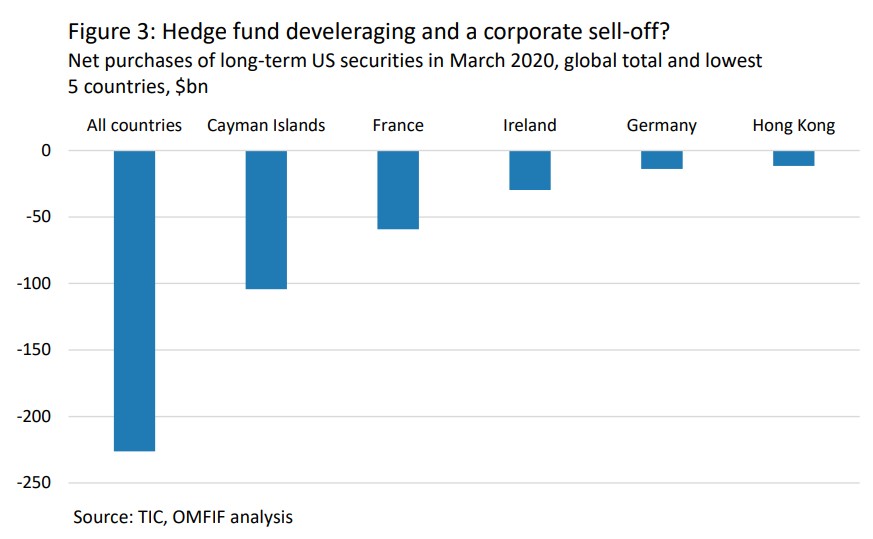 In the longer term, the investment behaviour of these large corporate cash pools will continue to influence conditions in the Treasury and corporate bond markets.

The nascent retreat of the corporate treasurer bid in US government and corporate bond markets may add upward pressure on short-term yields, which will be exacerbated by the potential decline in foreign purchases and growing structural federal deficits. Corporate treasurers overwhelmingly hold short-term assets, such as Treasury bills (as well as a lot of commercial paper, but the data is less clear across different filings).

The Trump administration has sought to issue largely at the short end of the yield curve, and the disappearance of a previously captive buyer will complicate debt management plans. While the Fed has absorbed a significant share of that issuance as part of its Covid-19 asset purchases, in the longer run, the absence of corporate treasurers will prove detrimental to bill markets. The same will apply to the corporate debt market, where the retreat of corporations may raise spreads at a time of record issuance. Previous research has highlighted that these companies’ corporate bond portfolios hold a large share of bank debt; it is worth keeping an eye on banks’ term funding spreads in the medium term.

These factors will complicate the coronavirus recovery, especially as Fed asset purchases grind to a halt and capricious deficit hawks once again cast their gaze on US debt sustainability. One open question is how a potential future Democratic administration might treat the tax system. Offshore bond portfolios began declining after corporate tax reform and the move from a global tax system to a partly territorial one, which encouraged repatriation. A less favourable corporate tax structure would keep profits offshore, potentially reigniting the corporate treasurer bid in US government and corporate fixed income markets.

While central bank purchases have dwarfed corporate cash pools for the time being, it is important to keep an eye on their dance with the tax system and fixed income markets as monetary authorities retreat and other buyers regain importance.

*This figure looks at 11 of the 14 largest holders of cash, cash equivalents, and marketable securities in the S&P500 as of 9 June. These are: Apple, Microsoft, Cisco, Oracle, Alphabet, Amazon, Facebook, Johnson & Johnson, Qualcomm, General Electric, General Motors, and Intel. Together these make up a significant majority of total offshore bond holdings by non-financial corporations. Some large holders – such as pharmaceutical giant Abbvie – were excluded as they did not sufficiently break down their holdings or did not disclose them at all.