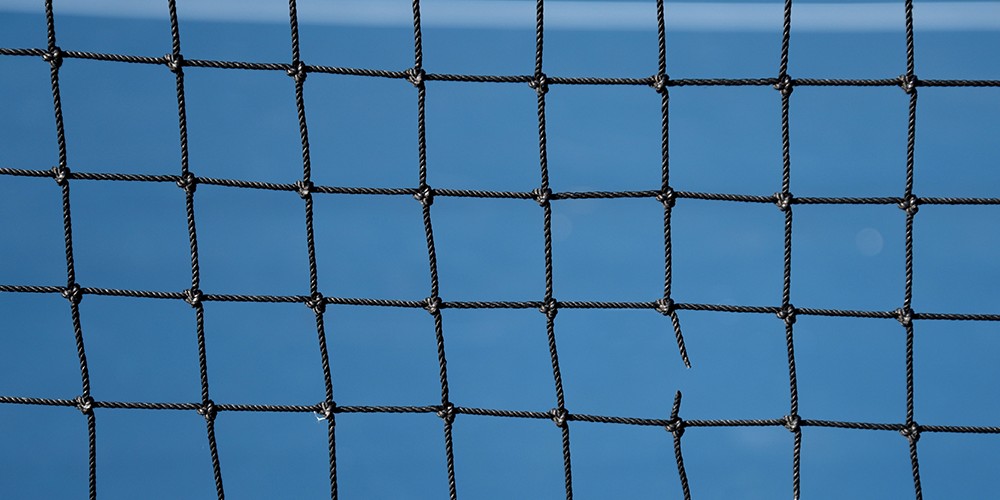 The economic disruption caused by Covid-19 has exposed gaps in the global financial safety net. Looming dollar shortages have exacerbated signs of dislocation in financial markets. The Federal Reserve was right to ease the terms for providing international dollar swap lines. But for a long-lasting economic and financial upset, they are not enough.

The problems highlight the International Monetary Fund’s role as a lender of last resort, with around $1tn of lending capacity. The IMF will need to strengthen its toolkit to support countries (including developed markets such as Italy) that face persistent financial difficulties. In December 2017, the IMF Board rejected proposals for a ‘short-term liquidity swap facility’ intended to support members with strong policies but needing liquidity for ‘potential balance of payments needs of a short-term, frequent and moderate nature’. Now is the time to bring back these proposals.

The global safety net, going beyond individual country reserves, extends across a patchwork of only loosely connected systems. Regional safety nets include the European Stability Mechanism, covering the euro area, the Chiang Mai initiative, for Association of Southeast Asian Nations economies plus China, Korea and Japan, and the ‘contingent reserve arrangement’ set up by Brazil, Russia, India, China and South Africa. But such financial arrangements are vulnerable to regional shocks when member states want to access the pool at the same time, as demonstrated by the euro area crisis in 2010-12. 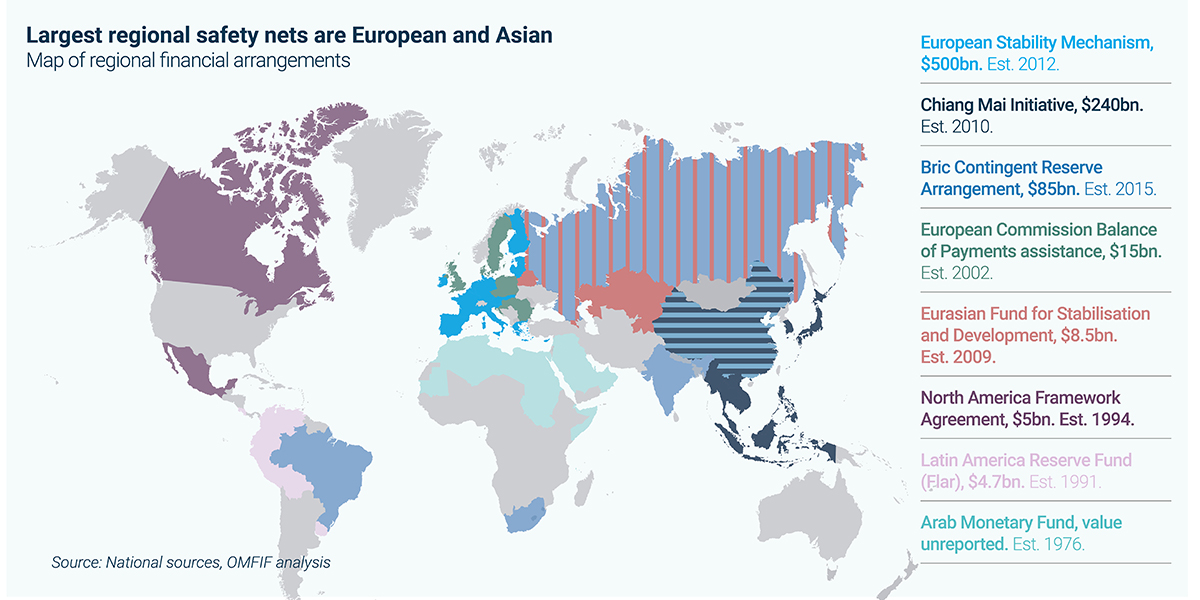 The IMF offers multiple instruments for financial assistance. These include the rapid financing instrument for emerging markets ($40bn), the rapid-disbursing emergency financing for low-income countries ($10bn) and the catastrophe containment and relief trust for relief on IMF debt ($200m). These can prove helpful in the short term. However, commodity exporters affected by falling prices or countries with underdeveloped health systems and no buffers will need much bigger external support. One reason why IMF officials proposed a short-term liquidity swap line in 2017 was because they reasoned that countries could turn to such facilities with less ‘stigma’ than that attached to using more familiar IMF lending instruments.

The Fed’s swap line actions are restricted to specific jurisdictions and exclude China, the biggest trading partner for most of the world economy. The Fed lines cover only bank financing. Non-bank financial intermediaries, which have risen in importance for trade finance since the 2008 crisis, are excluded. Swap lines may be difficult to use in practice. The Fed and Treasury have been highly reluctant to extend such instruments beyond a select group of developed countries. Much more is needed to build a genuine global safety net providing adequate insurance and financing for countries under financial stress.

Emerging market economies represent a core problem. Accumulated non-resident portfolio outflows from emerging markets have reached almost $70bn since mid-January when the first Covid-19 case was confirmed. This compares with less than $20bn at the equivalent time following past stress episodes, such as the collapse of Lehman Brothers that marked the start of the 2008 crisis. At their peak, cumulative outflows from emerging markets stood at under $26bn around three months after Lehman collapsed.

These past episodes created important incentives to strengthen safety nets. Individual countries, particularly in emerging economies, began adding to their foreign exchange reserves. Many set up complementary sovereign funds. In many cases, these were stabilisation funds, and in others with the ability to support exchange rate policy in times of crisis. According to the OMFIF Global Public Investor series, the collective sovereign fund and central bank reserves rose to $22.1tn in 2018 from $19.8tn in 2015, with more than half of these held in Asia and the Middle East.

Reserves by region and type of institution, $tn 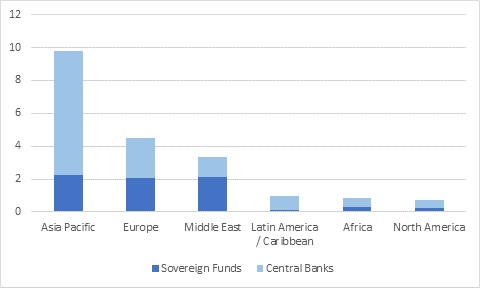 In response to the pandemic, central banks have extended accommodative monetary policies and governments have stepped in with fiscal support. Some countries have used other assets to support markets. The Philippines, for instance, is making use of its state pension fund. Size does not always guarantee resilience. In times of crisis, countries’ reserves can fall quickly, as in Russia in 2014-15 and more recently in Argentina.

Structural shifts in reserve asset composition may prove unhelpful. In the past few years central banks have responded to low yields in traditional assets by shifting their reserves to more risky and illiquid asset classes. 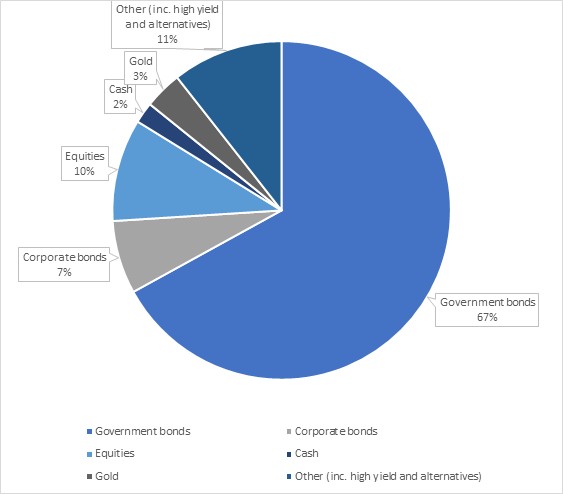 According to the 2019 GPI survey, around 10% of global central bank reserves are in equities and 7% in corporate bonds. This trend is most visible in Asia. 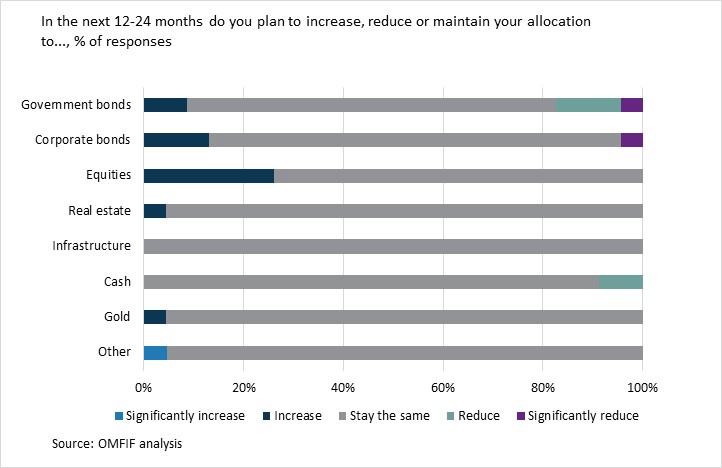 China, the world’s largest holder of US Treasuries and with no access to US swap lines, has been rebalancing its foreign asset holdings significantly. The debt component of Chinese foreign assets has fallen to just over half, from more than 90% between 2004-13. Depending on how liquidity holds up in international markets, these shifts may make reserves more difficult to use in challenging times – compounding the need for an IMF backstop.

Global liquidity in the time of Coronavirus