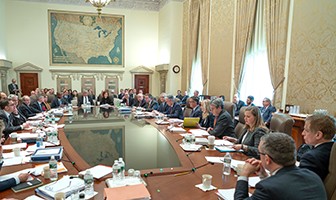 One cannot envy the job of a central banker these days. It’s not easy steering monetary policy given the need to anticipate the future amid tweets and challenges to central bank ‘independence’, persistently low inflation despite strong labour markets, low potential growth and global trade uncertainties.

Financial market participants mainly expect a 25 basis point cut in the fed funds rate at the end-July Federal Open Market Committee meeting. But the subsequent outlook for further cuts beyond July is clouded. Some expect another two or even three rate cuts. However, the economic case is unclear. With that in mind, here are some questions the Federal Reserve could answer at the post-FOMC press conference or the annual end-August Jackson Hole gathering.

Recently, FOMC speakers have pointed to undershooting core personal consumption expenditure inflation and risks from abroad as rationales for a rate cut to provide insurance and/or manage the risk of tail distributions. That is responsible and sensible.

The Fed has also long been clear that it is ‘data dependent’. GDP growth was expected to slow over the course of this year towards potential, partly given the waning impact of tax cuts. Manufacturing growth in the US is weakening. Corporate profits are softening, though off of highs (and if this reflects higher wages and a labour share of income could bode well for growth).

But other data point to firm underlying momentum and there are few signs of a tail risk outcome. The initial second-quarter GDP print exceeded expectations. Employment gains remain strong and above expectations. The unemployment rate (3.8%) is well below estimates of its natural rate. The strong labour markets are boosting disposable income. Retail sales have surpassed expectations to the upside. Consumption accounts for 70% of US GDP. While housing data is mixed, low mortgage rates could support housing demand going forward.

The International Monetary Fund just raised its 2019 US growth forecast, despite a global economic markdown. Key potential uncertainties have been removed – the latest budget deal will increase spending, which will support growth, and has taken default risks off the table with the debt ceiling’s suspension; tariffs were not ratcheted up on China after the G20 summit, and talks are resuming.

Policy-makers focus on the baseline, but must always be cognizant of tail risks. But if the data are holding up nicely, what is the relationship between data dependence and any need for more insurance?

A sputtering global economy and the US

The outlook for the global economy is not bright and risks are to the downside. After a major bout of weakness due to deleveraging and trade woes, China is stabilising. The euro area is weakening and emerging markets face their own woes. Germany in particular is being hit by weakness in manufacturing. President Donald Trump’s trade wars are casting a cloud over global investment and confidence, including in the US; the IMF has estimated a 0.5% hit to global GDP.

The US, however, is a relatively closed economy. Imports are only around 15% of US GDP, and are largely influenced by industrial supplies, capital goods and automotive products. But manufacturing accounts for slightly more than 10% of the US economy. Meanwhile, the overwhelming bulk of the economy is accounted for by services, and the US services purchasing managers’ index has been strong in the past quarter.

How much are global economic uncertainties and Trump’s trade wars hitting the US economy, and are other factors offsetting self-inflicted trade wounds?

US financial conditions are already highly accommodative and supportive of growth, as evidenced by the Chicago Fed National Conditions Index. The dollar is up, which represents a tightening in conditions, though as noted earlier the US economy is relatively closed. Meanwhile, stock prices have increased sharply, bond yields have plummeted and spreads have narrowed. Commercial lending is up. By all outward appearances, risk appetite remains quite healthy.

If overall financial conditions are highly accommodative, how does this play into the Fed’s current thinking on its monetary policy reaction function?

The Fed is appropriately guided by its dual mandate. But since the 2008 financial crisis, financial stabilityconsiderations are an increasingly important component of the Fed’s work. The financial health of the US banking system has been substantially strengthened since the crisis. Overall household and most corporate balance sheets are in decent shape.

Highly accommodative financial conditions, however, can give rise to froth – ‘irrational exuberance’ – though it is hard to pinpoint bubbles or readily identify high valuations.

In past decades, there was debate around whether monetary policy should play a role in addressing high asset prices. The general conclusion has correctly been that sound regulation of financial institutions and macroprudential supervision and oversight should be the first line of defence in addressing financial stability concerns. However, macroprudential regulation is still evolving both globally and in the US, and much further evolution is needed.

Even if sound regulation is the first line of defence, is there a role for monetary policy to lean into the wind against possible froth on financial stability grounds?

Answering these questions could substantially help the public better understand FOMC thinking on the outlook for interest rates.