On the road to a US-German trade war 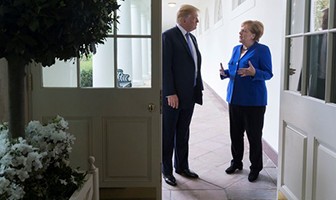 When an irresistible force meets an immovable object, something untoward usually happens.

So too with the irresistible force of Washington’s ‘America first’ trade policy and the immovable object of a balanced German budget under all circumstances. The result is unlikely to be positive either for the German or global economies.

Germany’s massive external current account surplus is a major source of irritation to the US, particularly as a principal economic objective of Donald Trump’s administration is to eliminate the US trade deficit. At around $300bn or 7.5% of GDP, Germany now has by far the world’s largest external surplus.

Already in April 2016 under the Obama administration, Germany’s outsized external surplus prompted the US Treasury to place it on the relatively short list of countries that the Treasury monitors for possible currency manipulation. Since Trump came to office in January 2017, US unease with Germany’s large external surplus has only become more pronounced.

One indication of rising US impatience with Germany’s external imbalance has been the president’s repeated accusations that Germany is manipulating its currency for competitive advantage. He has argued that, by abandoning the Deutsche Mark for the euro and tying its currency to southern Europe’s weak economy, Germany has benefited from a weak euro in place of a strong Deutsche Mark.

More recently, Trump has been highly critical of Mario Draghi, the outgoing head of the European Central Bank. The latter intimated that the ECB would respond to emerging European economic weakness by lowering interest rates and resuming its bond-buying programme. Trump sees these actions as an attempt to weaken the euro and gain a further unfair competitive advantage at the US’ expense.

Ominously from Germany’s viewpoint, President Trump has threatened repeatedly to impose a 25% import tariff on European automobiles. Making this threat more credible was the US Commerce Department’s determination in March that European automobiles constitute a national security threat.

The only thing holding President Trump from imposing these tariffs is his seeming reluctance to open up another trade war front before resolving the US-China trade dispute.

Germany’s economy is already on the cusp of a recession. It cannot afford a full-scale trade war with the US. Yet that is what it seems to be inviting by doing nothing to reduce its large external imbalance.

As if to underline this point, Chancellor Angela Merkel is ruling out any departure from Germany’s balanced budget policy, even though such a course of action would stimulate the weakening German economy. It would also help reduce the excessive level of the country’s savings and help strengthen the euro, which are the two primary sources of Germany’s outsized external surplus.

Berlin’s intransigence on the balanced budget issue, coupled with Trump’s determination to eliminate the US trade deficit, seems to be putting Germany and the US on a clear path towards a trade war. Continued protectionist threats, or a further weakening of the euro resulting from the UK leaving the European Union without a deal, would heighten the probability of a trade war. Any further weakening of the single currency would only fan US claims that Germany was benefitting unfairly from an artificially low currency.

A sensible way a US-German trade war could be avoided would be if both countries compromised and committed to policies that would help reduce their respective external imbalances.

The US might commit to a more disciplined budget policy. This would help reduce the US external deficit by boosting US savings and weakening the dollar. At the same time, the German government might agree to loosen its budget purse strings to stimulate the European economy. This would help to shrink Germany’s large external surplus by reducing its savings and contributing to a strengthening in the euro.

Sensible as such a compromise might be, based on Trump’s past record of fiscal irresponsibility and Merkel’s strong commitment to a balanced German budget, it is unlikely to happen. Rather, Germany – Europe’s largest economy – could soon be dealt a serious blow to its main export industry. That will have harmful consequences for the German and global economies.