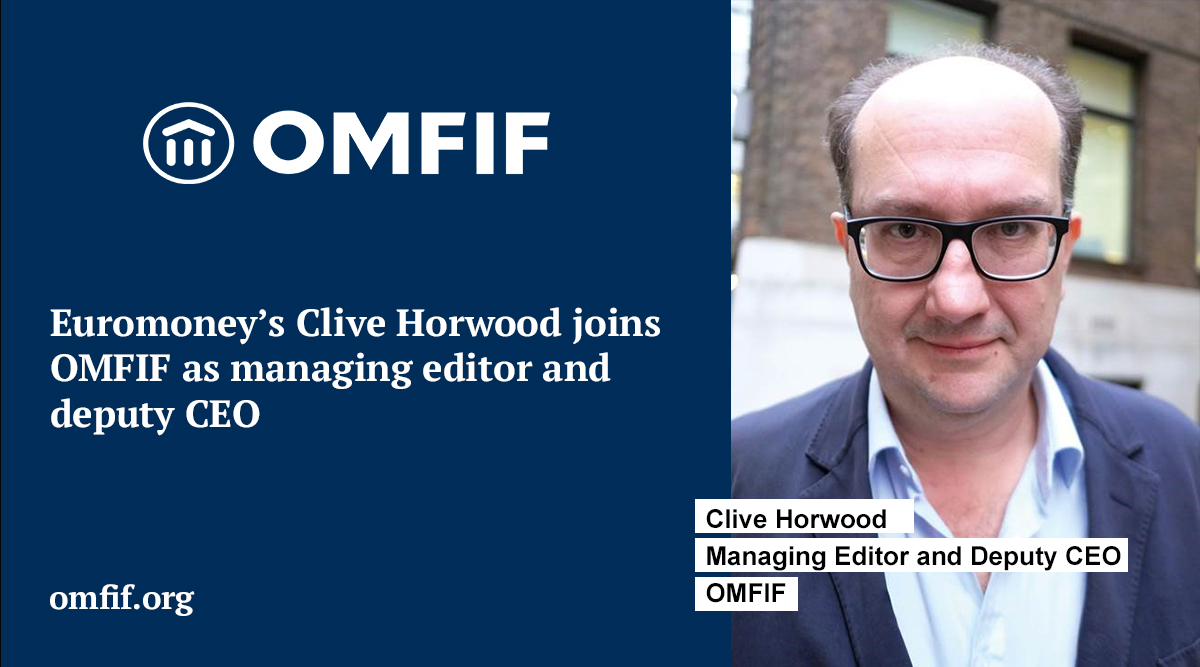 Horwood, 50, edited the leading trade title for global banking from 2005-20. He helped form the narrative for banks’ response to the 2008 financial crisis and pioneered coverage of international capital markets, environmental, social and governance-geared investing and digital banking, all major themes for OMFIF. Testifying to deep relationships with the heads of many of the world’s biggest financial institutions, Horwood interviewed 73 bank chief executives for Euromoney’s 50th anniversary edition last year.

Horwood, who starts at OMFIF on 9 November, joined Euromoney in 1993, editing his first title, International Bond Investor, in 1995. He was subsequently deputy editor of Euroweek, the capital markets newspaper (now Global Capital) and launch editor of Credit magazine. Before returning to Euromoney, he edited derivatives publication Risk. He also led the successful relaunch of Asiamoney in 2017.

David Marsh, co-founder and chairman of OMFIF, said: ‘Clive will make a big difference. He will be responsible for all OMFIF content across its platforms, working with our outstanding economists, researchers and advisers to strengthen our independent coverage in the triangle of finance, politics and technology. He will be a key part of the executive team leading strategic expansion in initiatives already deeply related to OMFIF’s core businesses such as capital markets and wealth management.’

John Orchard, chief executive, who joined OMFIF 10 months ago having been managing director at Euromoney Institutional Investor’s banking and finance group, said: ‘I’m looking forward to working with Clive again. There could not be a better time to support the dialogue between the official sector, commercial banks and institutional investors. If David hadn’t invented OMFIF 11 years ago, somebody would need to do so now. Clive’s extensive understanding of banks and capital market participants adds an extra dimension to our business.’

Clive Horwood said: ‘OMFIF is a unique proposition in financial markets. It has extraordinary reach and influence. Its content – through its institutes, events, publications and research – sets agendas and constructively brings together the public and private sectors. This will grow in importance as global finance emerges from the Covid crisis. We have far-reaching plans to broaden and deepen OMFIF’s international remit. I can’t wait to work with my new colleagues.’

Jean Pierre Mustier, CEO of UniCredit and president of the European Banking Federation, said: ‘Clive’s career as a financial journalist and editor has been notable for his willingness and ability to understand the key challenges banks face individually and as an industry. As editor of Euromoney he led coverage which helped to set the agenda for banking after the financial crisis. In these once-again challenging times, I wish him the very best in the role he will play at OMFIF in promoting best policy and practice.’

Colm Kelleher, former president, now senior adviser, at Morgan Stanley, said: ‘Clive has always been a fair, credible and effective editor. He deals with difficult issues, interprets them well and is forensic in his objectivity. I have known him a long time and rate him as one of the finest journalists of his generation. His coverage of the financial markets through a great period of change and challenges was even-handed and impressive.’

Piyush Gupta, CEO of DBS, said: ‘I have interacted with Clive frequently over the past decade. Clive has an amazing ability to identify early trends. He was one of the first to recognise the digital transformation at DBS and across the banking industry and the increasing importance of ESG. He has great ability to reframe the issues. His articulation of “peer advocacy” was very helpful in shaping DBS strategy in the early days of our 10-year transformation.’