In a year where Covid-19 dominated political and economic discourse, we look back at some of the other major stories of 2020. How should the European Union and Association of South East Asian Nations prioritise expansion? How would the winner of the US presidential election impact the world economy? These issues and more were put to OMFIF’s advisory network and social media followers over the past year. We review the results of these polls as well as showcase comments and analysis made by some of our top industry experts.

Each question was posed both in our quarterly Bulletin and in an online poll on Twitter. We combined the results and visualised them below.

Ursula von der Leyen, president of the European Commission, has expressed her support for opening accession talks with Albania and North Macedonia. French President Emmanuel Macron, however, has been a vocal opponent of that line of action, arguing that internal reforms should be prioritised over enlargement. What do you feel is the appropriate course of action for the European Union?

It would be wiser for the EU to focus on internal reforms rather than to promote accession talks now with Albania and North Macedonia. Given the structural rigidities in many EU economies and the rise of populism in the region, efforts are best directed towards making EU economies more dynamic.

The EU should open accession talk with Albania and North Macedonia. It is about credibility, which the EU badly needs in the coming turbulent times.

Since its inception more than 50 years ago, Asean has grown significantly in importance and now represents the world’s sixth largest economy. However, there are considerable regulatory and development disparities across Asean, and despite repeated calls for deeper economic integration, intra-regional trade remains low. Establishing a single market has been a long-standing goal for Asean. Do you see it being realised in the foreseeable future?

The famed ‘Asean way’ may need to be speeded somewhat. A few years ago, Brexit was cited as an example for slowing integration. These, the US-China trade war and other structural changes in technology and supply chains are seen as a reason for deepening integration. Asean can only reap benefits of economies of scale and scope implied in the label of ‘world’s sixth largest economy’ if it operates more like a single economy. While the political economy considerations are easier for some sectors than others, we will see more integration in the foreseeable future. The direction of travel is clear. Speed is not.

An Asean single market is unlikely to be realised in the foreseeable future. Fifty years ago, following the Vietnam war and Cambodian massacres, Asean was on the verge of becoming Asia’s version of the Balkans. Just 10 years, military skirmishes were occasionally breaking up around member states’ borders. Within each Asean member country, there are still ethnic and religious conflicts, and in some countries anti-government guerrillas occupy territories. In the present, circumstances Asean is more of a diplomatic community than an economic community.

There are marked differences in how eastern and western governments have handled the crisis, and the pandemic has heightened tensions between two of the world’s superpowers, the US and China.
With no single entity so far willing – or able – to lead a global response to the pandemic, is this the end of multilateralism, and the start of a new world order?

Multilateralism and global political stability are built on the intrinsic stability of their member parts. The post-1945 period enjoyed high stability among western democracies as well as newly Communist states under the auspices of their respective superpowers. The decline in the standing and power of global institutions is partially reflective of the failure of the social contracts within western democracies, thus undermining the strongest supporters of global order. It doesn’t help that the dominant emerging challenger is composed of a political system consistently worried about its own legitimacy and social stability. This leaves little room for the restoration of world order, instead creating power vacuums across the globe, with regional initiatives of varying success to manage them.

This exceptionally severe global crisis, with an adverse impact on both the demand and supply side, does not mean the end of multilateralism. However, a pandemic of this nature forces governments, as well as local institutions, to co-operate more effectively. This, in turn, may trigger the start of a new world order because the current multilateral institutional set-up fails to address the underlying weaknesses for addressing this crisis. 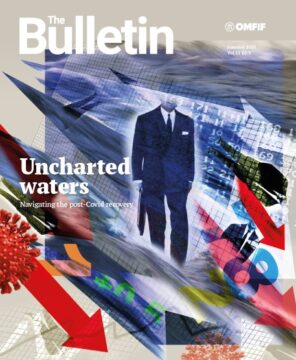 Donald Trump’s presidency has been a whirlwind of scandals, and many polls predict a Joe Biden victory. Will forecasts be proven correct?

Joe Biden will be elected President, but how the result is received will help define American democracy. Together with UK Prime Minister Boris Johnson’s attempts to suspend parliament and overrule his own Brexit agreement, Anglo Saxon adherence to the law is becoming a more questionable assumption for investors.

I hope so. Donald Trump is no longer the insurgent as he was in 2016. Many commentators draw a comparison with 1968, when Richard Nixon was elected on a ‘law and order’ ticket at a time of social unrest. But it was far worse in 1968. After Martin Luther King Jr. was assassinated, 110 US cities were set ablaze and the US army mounted machine guns on Capitol Hill to protect Congress. It was only in 1962 that the first African-American student was escorted into the University of Mississippi by US troops. Most Americans repudiate the white supremacist outfits Trump sends coded messages of support to. His offer of four more years of division and hate, along with the country’s 200,000 Covid deaths, are not enticing.