European tales of drama and entanglement 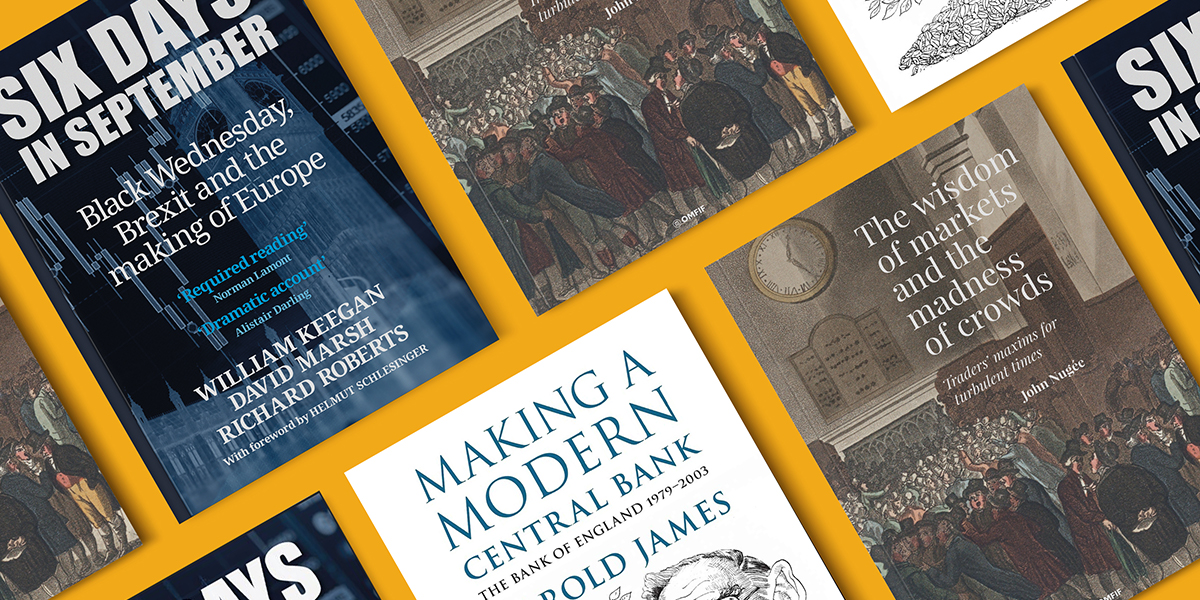 Currency dramas linking the UK and continental Europe are tangled tales of confusion, intrigue and progressive estrangement. Harold James’ book on the 1979-2003 history of the Bank of England, to be launched by OMFIF on 23 November, acts as a powerful companion volume to Six Days in September: Black Wednesday, Brexit and the making of Europe, by William Keegan, David Marsh and the late Richard Roberts. The book, published by OMFIF Press in September 2017, marked the 25th anniversary of Britain’s 1992 departure from the exchange rate mechanism of the European Monetary System.

Both books provide important information about events leading up to the 2008 financial crisis and Britain’s June 2016 referendum vote to leave the European Union. As the Financial Times wrote in its review of Six Days in September – which the paper called ‘a tale told with verve, drawing on once-secret Whitehall documents and contacts with key players further afield’ – an almost straight line joins 16 September 1992 and 23 June 2016. ‘Black Wednesday was the moment when Tory antipathy towards the EU curdled into the eurosceptic uprising that eventually led [British Prime Minister David] Cameron to surrender to demands for a plebiscite.’

According to Six Days in September, ‘Wednesday 16 September was a day of transformation for Britain and Europe. Just 12 hours of frenetic foreign exchange trading tore apart Britain’s economic strategy. …The official world was disunited, and open divergences had emerged among politicians and functionaries in different countries. The markets, on the other hand, were pointing

uniformly in just one direction – sell sterling…. Britain’s ERM exit in September 1992 was a public, semi-ritualised affair, bound up with widespread political interaction and manoeuvring – an extraordinary contrast to the almost complete lack of consultation that accompanied the act of joining in October 1990.’

John Nugée, a former chief manager of reserves at the Bank, of England and former OMFIF board member, who had a ringside seat at the spectacle, comments in his preface to Six Days in September, ‘It is a gripping read. If it comes across like a fast-paced thriller then this is because that is precisely what it felt like at the time, with all the action concertinaed into less than a week.’ Nugée has now brought out his own book at the OMFIF Press, on investment behaviour – The wisdom of markets and the madness of crowds. In the ERM exit, Nugée states, ‘There are popular villains aplenty, from the Deutsche Bundesbank to George Soros. There are heroes too. The Bank of England comes in for much criticism, but from a technical point of view its dealing desk did all that could be asked of it and more.’ Sterling’s downfall was ‘a blow from which the Conservative party took nearly 20 years to recover.’ But it was also a catalyst for renewed growth. ‘Quite early on, “Black Wednesday” was being rechristened “White Wednesday”, the start of Britain’s 15-year period of strength and prosperity.’

Keegan, Marsh and Roberts write that Britain’s ‘litany of misjudgement’ in European dealings forms a ‘discouraging backcloth’ for negotiations over Britain’s EU departure. They highlight, in the post-2016 aftermath, Franco-German plans for a much firmer political and economic union. ‘Successive waves of pro-integrationist fervour in France and Germany, in past decades, have foundered as a result of poor economic performance, external perturbations and insufficient application. This time it could be different. The UK’s action in sidelining itself from continental Europe – like the British decision to stand aside from the common market in the 1950s – has undoubtedly provided fresh impetus for Franco-German unity, with multiple implications across Europe.’

The books by James, and Keegan, Marsh and Roberts, are strikingly complementary. Black Wednesday revelations in James’ book include:

Schlesinger, now aged 96, was a pivotal player in the 1992 upheavals. In a foreword to the OMFIF Press book, he wrote, ‘The events described in Six Days in September make clear how, right from the start, there were different judgements of the political merits of Britain’s EMS entry.’ Referring to the repercussions of a notorious September 1992 interview with the Wall Street Journal and Handelsblatt, he stated, ‘I regret to this day – without being able to assess the effect – that a general remark by myself, not focused especially on the pound, should have played a role in aggravating sterling’s position.’

When he heard about the interview, on 15 September, the Bank of England was aghast – and baffled. ‘Schlesinger is a friend… He would not have done this to us,’ was Leigh-Pemberton’s first reaction. ‘If it has happened it must be an accident.’ Budd recalled how Norman Lamont, chancellor of the exchequer, meeting at the Treasury on 15 September to discuss sterling’s plight, asked Leigh-Pemberton to contact Schlesinger so he could withdraw the remarks. ‘Robin left the room and then came back. Lamont asked him whether he had got hold of Schlesinger. Robin explained that we must understand that this was the president of the Bundesbank and getting him to withdraw such a statement was not all that easy.’ Budd concluded: ‘It’s all over.’ Schlesinger vented his fatalistic view of the rumpus when he told the French ambassador to Germany on 1 November that Britain’s ERM departure had been ‘inevitable’.

Budd later summarised in ‘slightly cruel’ manner the European currency adventure: ‘We went into the ERM in despair and left in disgrace.’ His overall judgement was more positive ‘Although it was certainly a political catastrophe, the case can be made that it was an economic triumph and marked the turning point in our macroeconomic performance.’

Purchase The wisdom of markets and the madness of crowds