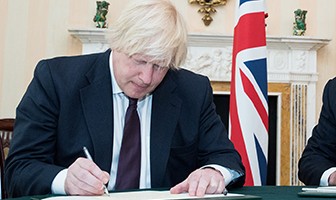 Reality test for boy who would be king

The British prime minister has changed, but the grim internal and external political arithmetic remains the same. Boris Johnson entered 10 Downing Street on Wednesday at the helm of a weak, uncertain government facing very similar constraints to those that dogged Theresa May, his luckless predecessor.

As a small boy, Johnson wished to be king of the world when he grew up. His style is to be fundamentally unserious, whether in personal appearance, approach to work or relationship to the truth. As May’s foreign secretary between 2016-18, he refused to read briefs and committed diplomatic blunders that frequently embarrassed his staff and sometimes the nation. But he is immensely talented, making considerable sums since leaving the cabinet a year ago from newspaper columns and international speech-making.

His columns for The Daily Telegraph as Brussels correspondent 25 years ago were scurrilous creations multiplying the myth of a relentless European bureaucracy imposing absurd regulations on helpless British consumers. The largely fictional articles succeeded in fostering an anti-EU lobby among Conservatives and their right-wing supporters.

Reality may be about to hit home. Leading figures in EU governments, the European Commission and European Parliament have politely welcomed the prospect of working with Johnson, but underline the near-zero manoeuvring room for changing last year’s exit deal. Furthermore, the wafer-thin parliamentary majority of the Conservative party and its fickle Northern Ireland Democratic Unionist allies could soon shrink still further, depending on by-elections and possible defections by members of parliament. Coupled with this, the House of Commons’ majority opposed to a no-deal withdrawal – including a determined faction in his own party – shows no sign of losing strength, undermining the force of Johnson’s declaration of a ‘do or die’ exit by the stated date of 31 October.

Britain’s leading independent forecasting institute, the National Institute of Economic and Social Research, believes there is already a 25% likelihood that the UK is in recession. The NIESR said on Wednesday that a disorderly no-deal Brexit could provoke a severe downturn, a further rise in the current account deficit, a non-recoverable 5% fall in longer-term output and a 10% fall in sterling, raising the possibility of a 1970s-stye currency crisis.

Johnson’s biggest short-term threat is that on the second day of his tenure, 25 July, he could lose a vote of confidence in parliament, forcing a general election that neither the Conservatives nor the Labour opposition wish. Much more probable is that when parliament returns from recess on 2 September, cooler heads would prevail. Johnson would organise a compromise with the EU and get a deal passed the Commons bearing a strong resemblance to May’s previously rejected agreement.

If an election took place, which seems at present improbable, almost any outcome is possible: a Conservative-Brexit Party coalition, large losses for Labour and big wins for the pro-EU Liberal Democrats. The Brexit issue is costly because of the uncertainty it raises. Once it is settled, the British economy is probably resilient enough to rise above the challenge. The danger for Johnson – unless he profits in coming months from unexpected good fortune – is that by the time significant recovery materialises, he may no longer be prime minister.

Lord (Meghnad) Desai, a Labour peer, is Emeritus Professor of Economics at the London School of Economics and Political Science, and Chair of the OMFIF Advisory Council. David Marsh is Chairman of OMFIF.