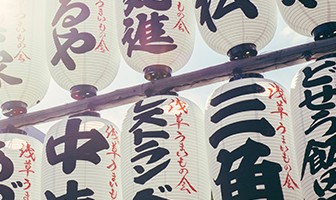 Rising populism, the exacerbation of economic inequality by quantitative easing, and calls for the reversal of globalisation point to a possible paradigm shift that could prove as forceful as the fall of communism in 1989 or even the establishment of the ‘new world order’ after 1945.

Policy-makers appear ill-equipped to deal with this. Their traditional reaction functions having faltered, central banks are again turning dovish. There is precedent in Japan, which is approaching its 22nd year of policy-loosening without convincing inflation.

In the late 1980s Japanese asset prices ballooned, stylised by the valuation of the emperor’s palace grounds (at $139,000 per square foot) surpassing that of California’s total real estate. Tumbling asset prices from 1991 hurt banks’ balance sheets and collateral, contributing to economy-wide deflation by 1995. This prompted banks to write off loans, and the Bank of Japan between 1997-98 to mop up their commercial paper.

Japan’s finance ministry, presiding over escalating government liabilities, became reliant on the BoJ to control its debt-service costs. Caught in a liquidity trap, only in 2007 did Japan recoup its pre-1988 nominal GDP. The 2008 financial crisis meant that recovery was short-lived.

These observations do not bode well for other economies like the UK, US and Germany. They have taken between four and nine years to regain their nominal GDP lost since 2008. Their inflation expectations are low, even after a decade of pump-priming liquidity. Moreover, as Japan’s experience illustrates, the only real benefits of QE are to support asset prices and suppress bond yields (Chart 1). 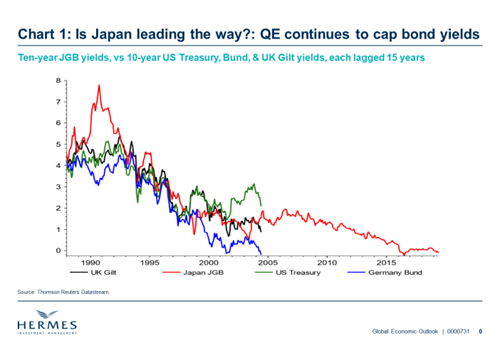 Bloated asset prices are a result of QE; they are also one reason why, in such a febrile political climate, QE cannot be reversed, for fear of terminating the recovery in the process. Therefore the spoils of QE will continue to fall to those that probably need them least, namely asset owners.

Financial markets are sensing the effect of ‘Japanification’, with government bond yields in Germany now below those of Japan. Germany’s bank margins are under pressure from negative policy rates, and some commentators describe the euro area as ‘overbanked’. Aging populations, rigid labour laws and pressure to devalue internally are other worrying similarities between core euro members and Japan.

There are of course differences, but they offer little reassurance. Japan in the late 1990s was acting alone, with demand-overheating, not deflation, the G7’s main concern. By comparison, since 2008 major economies have acted swiftly and in relative concert to achieve similar goals. But their inflation outlooks are no more convincing. Japan has benefited from social cohesion, with the Liberal Democratic Party in power almost uninterruptedly since 1955 (the exceptions being the periods between 1993-94 and 2009-12). This contrasts strongly with the political disruption and growing anti-establishment and populist rhetoric prevalent in the US and much of Europe. 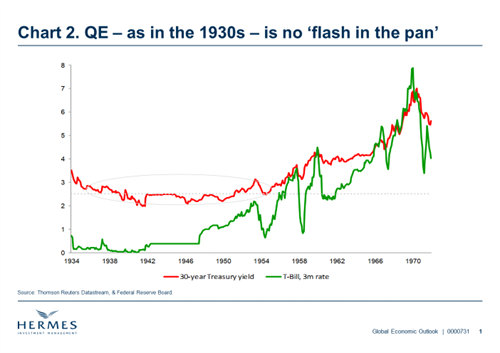 In policy terms, there are at least two common threads. First, that it is difficult to wean economies off QE. The last time this happened was when the US pulled out of the great depression in the 1930s. Its QE then ran for 14 years, unbroken to 1951 (Chart 2), despite inflation touching 20% in 1947. This was clearly a different time, but, taken as a guide, it implies that we may be little more than halfway through our own QE journey.

Second, prolonging cheap money reduces central banks’ arsenals, diluting their ability to affect change. The dilemma is whether policy-makers can re-equip themselves for future economic downturns, or – like Japan – preserve the status quo. Central banks’ bloated balance sheets suggest it will be the latter.

In that case, with the yield-clamp of QE already in place, governments trying to preserve growth and appease disaffected electorates may as well do something that justifies it; it is time to open the fiscal box.