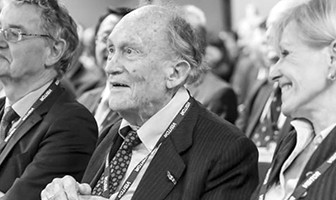 Hendrikus Johannes ‘Johan’ Witteveen, economist, philosopher, politician and international public servant, who died on 23 April in the Netherlands aged 97, was best known internationally for his 1973-78 term as managing director of the International Monetary Fund.

He lived a rich and varied life spanning many worlds. His youth was overshadowed by Nazi Germany’s wartime occupation of the Netherlands, during which he spent time hiding in the marshes. His father was city planner of Rotterdam and oversaw its postwar reconstruction after German bombing in 1940. These experiences underlay his lifelong commitment to Universal Sufi mysticism. He integrated his inner life with his calling to serve humanity. He believed a healthy economy was the key providing the means for mankind to enhance the core principles of love, harmony and beauty.

His academic strength and commitment to economics brought him a succession of roles: the teaching of economics in Rotterdam, and positions in Dutch political life including the posts of finance minister and deputy prime minister. Quite unexpectedly, at the behest of then-French Finance Minister Valéry Giscard d’Estaing, he was appointed in 1973 to head the IMF. His great contribution was to lead the global community through the 1973 oil shock, mitigating the consequences through devising recycling facilities to channel finance from the oil states.

His determination to focus on getting the right answers to the big questions of the day at the expense of routine business sometimes frustrated the staff, as did his ventures into personal diplomacy, vindicated when the results proved to justify the means.

In the UK he became notorious as the face of the feared IMF, laying firm conditions for public spending cuts as part of a $3.9bn loan package – at the time, the largest ever from the Fund – during the 1976 political and economic crisis over sterling. This required great delicacy as he navigated the civil war within the UK government. Years later, when he spoke at an OMFIF dinner in Utrecht attended by David Owen, in 1976 a junior member of James Callaghan’s Labour government (and later foreign secretary), Owen told him he had done the right thing in 1976 – an accolade Witteveen said he never thought he would hear from the Labour party.

In 2016 Witteveen travelled to London to give a rousing speech at the UK Treasury to launch the OMFIF Press book by Richard Roberts (who sadly died a year later) marking the 40th anniversary of the 1976 crisis. Thereafter Witteveen became honorary chairman of the OMFIF advisory council.

His reserved manner often drew out unexpected insights from his interlocutors, as in ‘I’ve come a long way for a fellow traveller’ (Denis Healey, Callaghan’s chancellor of the exchequer, referring to his time as a former member of the Communist party), and ‘I think gold is marvellous, don’t you’ (Margaret Thatcher, leader of the British opposition in 1976 and later prime minister).

His personal engagement with leaders outside the industrial countries was just as important in dealing with a world struggling with deficits and instability. He was equally adept securing finance from the Shah of Iran or Saudi Arabian King Feisal, or debating development finance with Indira Gandhi or Ferdinand Marcos, the Indian and Philippines leaders. (It may come as a surprise to learn that in the judgement of both Witteveen and Robert McNamara, then heading the World Bank, Marcos was among the most economically literate of third-world leaders.) Witteveen’s commitment to international policy analysis led him with David Rockefeller, the Chase Manhattan chairman, to support the foundation of the G30, a Washington-based organisation linking international finance officials and leaders from the private sector, and serve as its first chair.

He declined to serve a second term at the IMF as he dealt with the terminal illness of one of his children. Subsequently he served as board member and adviser to several international companies. He particularly relished his role with General Motors, which brought with it the duty to test out new models which he drove at hair-raising speed along the Dutch dykes, notwithstanding his notoriously poor eyesight.

Witteveen remained active in his Sufi pursuits, writing on philosophy as well as economics. In his 2016 UK Treasury speech, he described how philosophy informed his approach to economic policy. This same spirit gave him the fortitude to handle not just the early death of one son, but the loss of another son and his family in the 2014 Malaysian Airlines Ukrainian air crash, and the death of his wife Liesbeth in 2006.

He was unfailingly thoughtful in his personal relations. When put up in the Ritz in Paris and assigned the grand suite on the Place Vendome, he decided it would be better used by his young personal assistant who was there for the weekend whereas he was there just for the night. This simple act symbolises his life; strict rationality wholly suffused with humanity.

David Green was Personal Assistant to Johannes Witteveen between 1974-77. He is currently adviser to the Chairman on Brexit and the City at the Royal Bank of Scotland.