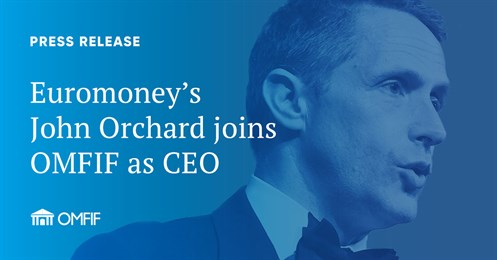 Orchard, 49, a member of Euromoney’s management board, who started with the London stock market-quoted global information business in 1994, will join the Official Monetary and Financial Institutions Forum on 1 January. Orchard oversees all aspects of Euromoney’s £65m turnover finance and banking division, comprising Euromoney, the publishing and events business, GlobalCapital, the primary capital markets news, data and events service, and IMN, the New York-based securitisation and real estate events business.

He has been presiding over events and publications to mark Euromoney’s 50th anniversary, including the organisation’s celebratory dinner on 10 July at the London Hilton with 500 senior bankers and their teams.

Orchard has a double honours degree in German language and European history from the University of East Anglia, where he studied under the tutorship of the writer W.G. Sebald. He will chair OMFIF’s executive committee and join the OMFIF board.

David Marsh, OMFIF chairman and co-founder, who becomes non-executive in January, said, ‘John brings all-round strengths in product and editorial, operations, sales and marketing as well as data and training. Euromoney is a venerable 50, while OMFIF is 10 years old in January – this is a great chance to build on John’s experience, including in Germany. We will increasingly be flying the post-Brexit flag in continental Europe, and indeed across the world.’

John Orchard said, ‘I have admired OMFIF for some time. The quality of the network is first-class, and its remit to foster communication, knowledge and understanding between the public and private sectors in finance is of paramount importance. I look forward to expanding the scope and impact of that remit.’

Mark Sobel, OMFIF’s US chairman (Washington), and Patricia Haas Cleveland, president of US operations (New York), said, ‘This is great news for building our business in the US and beyond. We see significant opportunities to expand OMFIF’s operations in research, meetings and publications, including in banking and financial markets. John’s track record and name recognition add useful global aspects to our work.

Mark Burgess, OMFIF’s Asia Pacific chairman (Melbourne), and Adam Cotter, Asia director (Singapore), said, ‘Much of OMFIFs future expansion will be in Asia – in infrastructure, sustainable finance, capital markets innovation and many other fields. Asia is where significant shares of global capital will be spent and sourced. John’s skills built up at Euromoney will provide OMFIF with the leadership for its next stage of growth.’

Simon Lewis, chief executive of Association for Financial Markets in Europe, said, ‘As someone who knows and respects both Euromoney and OMFIF, I’m sure that John’s appointment is a great fit. With his energy, style and engagement with the world of finance he will build on the tremendous platform that David as the founder and his team have created.’