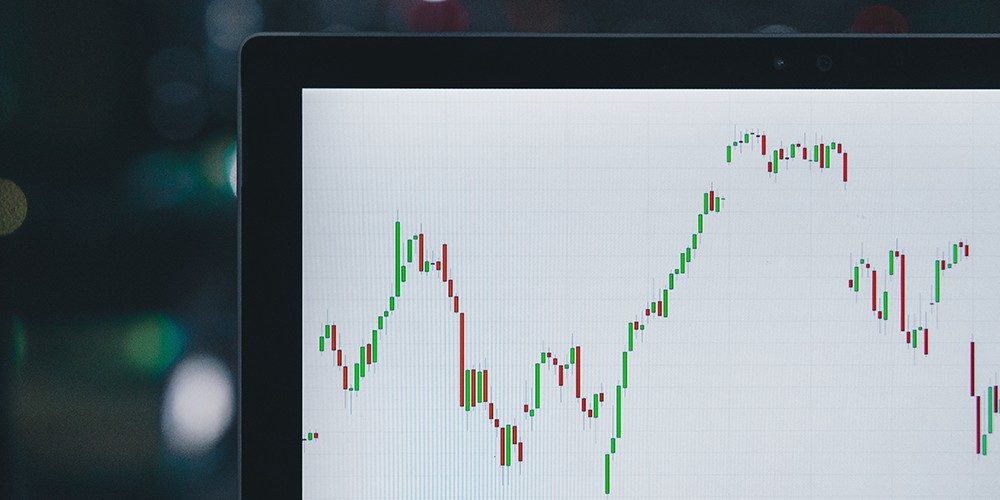 FOMC should use forthcoming meetings to fix policy framework

Since the 2008 financial crisis, the 2012 revelation of fraud in calculations for the London interbank offered rate (Libor), and the implementation of Basel III, one critical issue has loomed over US monetary policy-making: the choice of alternative reference and target rates.

In June 2017, the Federal Reserve selected the secured overnight financing rate as its alternative reference rate. But its lethargy in reforming its target rate has created significant uncertainty in financial markets. That has contributed to the turmoil and ructions that have upset the overnight rates complex since the end of quantitative easing, particularly in September, when the repo market ran short of liquidity. The Fed should use the temporary pause in interest rate movement to make inroads in resolving this long-standing quandary. 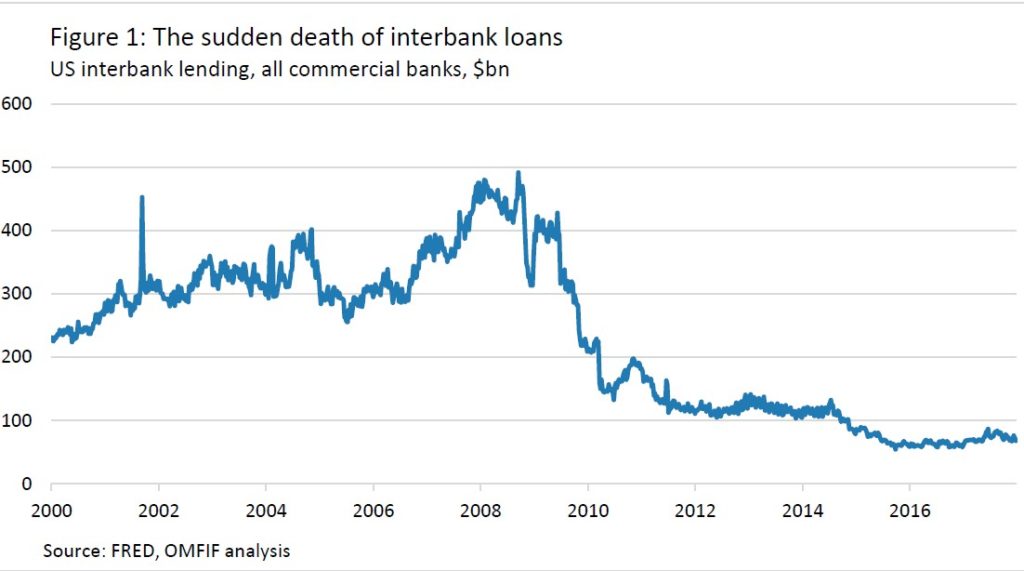 Secured repurchase markets have taken a large share of the spoils from this decline. While overall reliance on short-term funding has fallen due to post-crisis reforms, secured markets in the US covered by Sofr have generally recorded daily volumes between $900bn and $1tn in 2019, whereas unsecured daily transaction volumes have stagnated and declined (for example, Libor-linked transactions have been stable at around $500bn).

The relevant, systemically important players in the financial system have changed accordingly. While unsecured interbank markets were populated by banks, secured markets are made up of broker-dealers and money market funds, with banks lending in these markets mostly on an opportunistic basis.

This move from unsecured to secured lending, and from interbank to interdealer markets, has proven deeply problematic for the Fed. Its formal policy target since October 1979 – the effective Federal Funds rate – is an unsecured interbank lending rate. It is distinct from Libor, but has experienced a similar decline since the financial crisis and, more importantly, since the implementation of Basel III. Over the course of 2019, the Fed funds market has averaged a daily transaction volume of around $68bn, with only a dozen or so active market participants (mostly Federal Home Loan Banks and a handful of non-US banks). The market has become largely inactive; as Credit Suisse’s Zoltan Pozsar has noted, if the chart of EFFR were an electrocardiogram, the market could be declared dead. 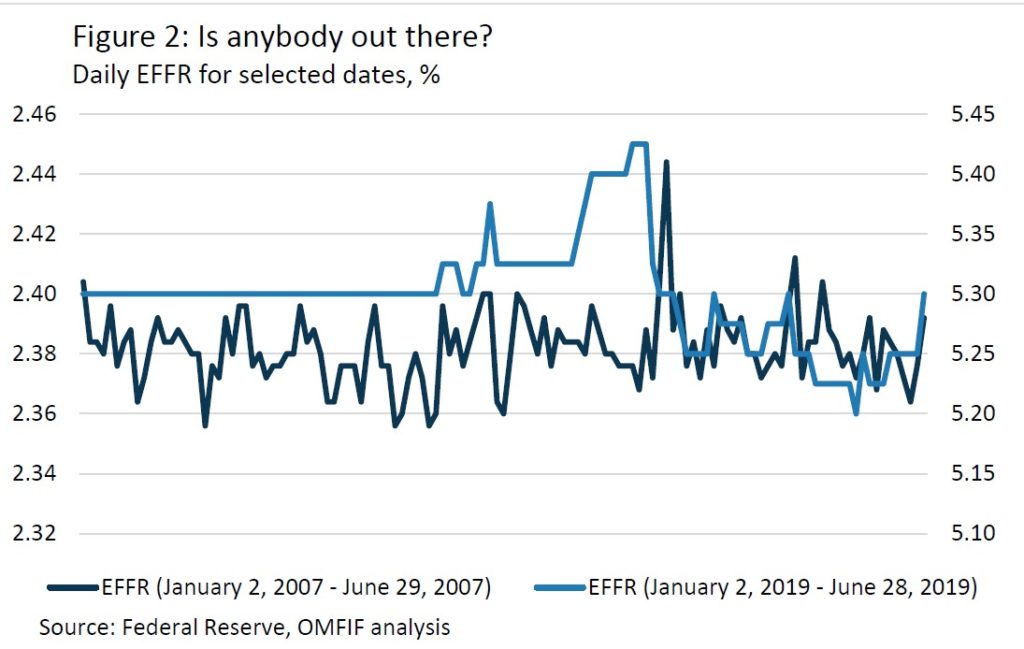 As such, around 2015, the Fed faced the twin challenge of replacing its reference and target rates. In the case of the former, it announced in June 2017 that it had selected the secured overnight financing rate as the successor to Libor. Sofr is calculated algorithmically, unlike Libor, and focuses exclusively on overnight US Treasury collateral repo, a specific but high-volume tranche of the secured market. Its underlying transactions include tri-party, bilateral, and Depository Trust and Clearing Corporation-cleared repos, giving it a broad base of support. However, it has faced criticism for lacking forward-looking term ‘versions’, such as a one-week or three-month Sofr (though the Fed has announced repeatedly that these are forthcoming). Nevertheless, Sofr is the most voluminous by far of the three main options, which makes it a strong pick as a reference rate. 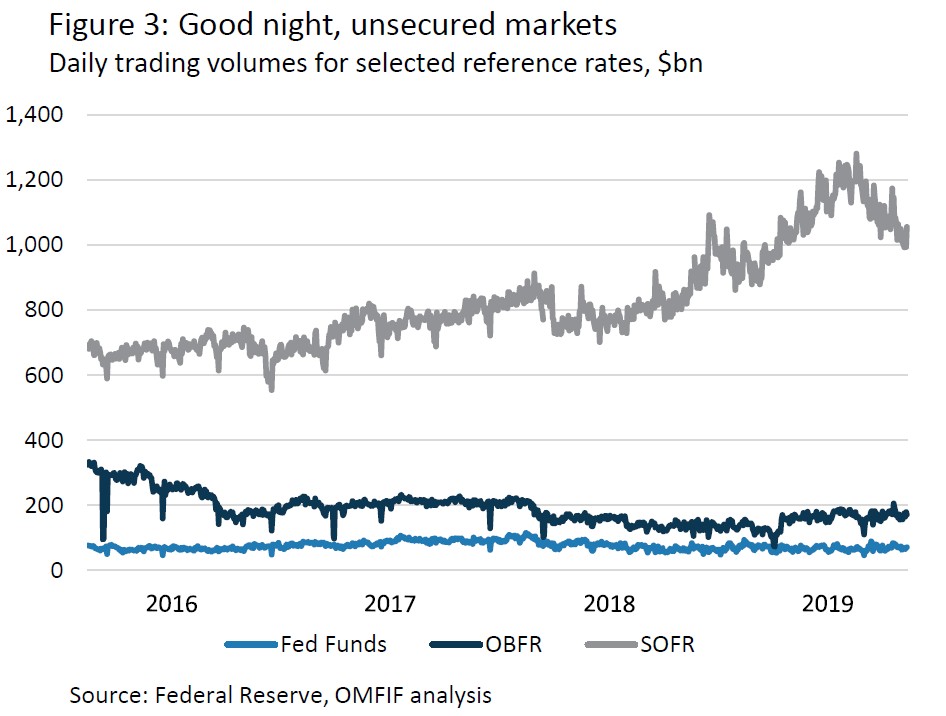 Despite the choice of a secured reference rate, the debate around the Fed’s target rate remains unresolved. It continues to target Fed funds despite the relative irrelevance and illiquidity of the market. Commentary on the Fed’s ongoing target rate issue has suggested that, rather than EFFR, it should choose to pursue various repo rates (Sofr among them), or something akin to the overnight bank funding rate. The shift towards secured wholesale markets makes the former a far more palatable choice, and indeed it makes sense for the reference and target rates to refer to the same system.

The problem with switching to a repo-based policy rate will be familiar to anyone who followed September’s liquidity episode. There is no straightforward, reliable or formalised way for the Fed to cap repo rates during a period of money market tension, in the way the (albeit stigmatised) discount window used to cap interbank rates, or the way swap lines can cap dollar rates for offshore institutions. Though there is a hard floor under repo rates for money market funds and broker-dealers in a crisis – the reverse repurchase facility – there is no parallel cap on repo rates, which makes targeting Sofr or any other repo rate a serious risk and impossible under the current policy framework. 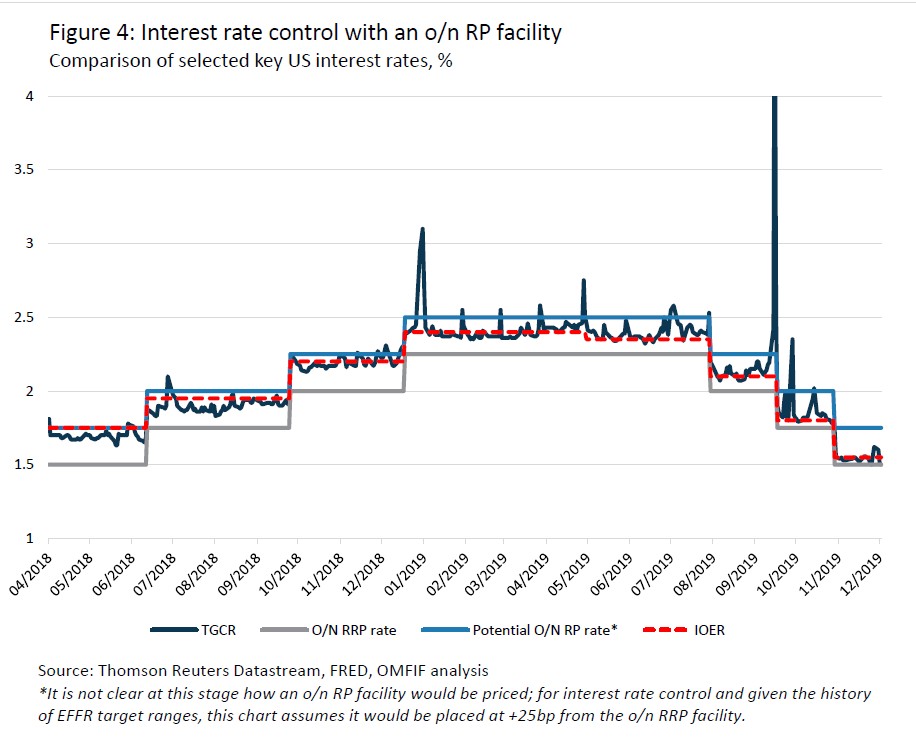 Switching to a secured target rate would require significant redevelopment of the monetary policy framework, including, most importantly, the design and implementation of a standing repo facility to provide a hard cap on repo rates during times of stress. This would represent something like discount window access for dealers and money market funds. The Fed’s choice of Sofr as a reference rate, the seeming inevitability of moving beyond EFFR, and the probability of a secured target rate make the repo facility a necessity. It would also reduce the importance of the interest rate on excessive reserves, which has proven an unreliable and leaky tool for interest rate control.

However, the Fed has been slow to discuss this required change. The issue of the standing repo facility was last mentioned at a Federal Open Market Committee meeting in October, where participants shared their views on some of the broad design, access and implementation choices they would have to make.

Given the urgency and scale of the issue, it would make sense for FOMC members to take advantage of the temporary pause in rate moves to ruminate and expound further on the future of the target rate and the monetary policy framework. The Fed is currently in the worst possible position. It has elevated the importance and public perception of repo markets by naming Sofr as its reference choice, and left itself unable to control repo markets due to glaring holes in its policy framework.

For more on the Fed: