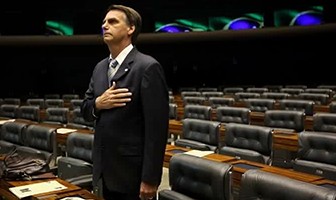 President has failed to put country back on sustainable track

Judging by his disappointing performance in his first six months in office, Brazilian President Jair Bolsonaro is likely to learn the hard way that trying to restore order to Brazil’s shaky public finances is like dealing with a charging jaguar with only one bullet in his rifle. If he fails to use that bullet well and in a timely fashion, those shaky public finances will overwhelm his presidency.

At the start of this year, Bolsanoro’s move into the presidential palace raised market hopes that he would revitalise Brazil’s economy, build a political consensus for much-needed pension reform and place public finances on a more sustainable track. So far, he has failed to make much progress in these areas as he engaged in divisive politics and his administration became riven by internal squabbles.

It appears that, far from increasing, Brazil’s GDP contracted in the first quarter of the year and is expected to increase by less than 1.5% for 2019 as a whole. A comprehensive budget reduction plan is yet to be presented, and Bolsonaro’s discordant style has prevented him from building congressional support for his pension reform plan.

Markets have reacted to these disappointments by selling Brazilian financial assets. At the same time, despite an easier US monetary policy stance, since the start of the year the Brazilian real has depreciated by around 10%, taking it back to its weakest level in the past few years. These developments raise the spectre of a vicious cycle of currency depreciation leading to weaker economic growth and to wider public deficits that in turn could lead to further currency weakening.

The urgent need for Bolsonaro to address his country’s weak public finances cannot be overstated. Brazil’s budget deficit is around 7.5% of GDP, and its public debt to GDP ratio at 85% – it could well exceed 100% by 2023. This makes the country particularly vulnerable to a full-blown public debt crisis if the government fails to devise a credible budget correction programme.

The size of Brazil’s needed budget adjustment should not be underestimated. While the country is running a primary budget deficit of 1.5% of GDP, it would seem to need a primary budget surplus of at least 2% of GDP to stabilise its debt to GDP ratio. The implied minimum budget adjustment of around 3.5% of GDP underlines the urgency of securing early passage of a far-reaching pension reform.

Brazil has the world’s seventh largest economy, with a GDP of around $2tn. This makes it systemically important in the sense that a debt crisis in Brazil could have spillover effects to the rest of the global economy. One must hope Bolsonaro soon gets a handle on his country’s public finance problems before they both overwhelm his presidency and raise risks the world over.