The geopolitics of protectionism

It is generally accepted that the world economy is no longer experiencing globalisation. While globalisation had been a benign tailwind for global investors, its reversal will generate repeated disruptions in the form of new and changing trade barriers, government intervention in cross-border capital flows and regulatory competition that distorts trade patterns.

The other difference is that globalisation was an economic process with political fallout, whereas deglobalisation is a political process with economic fallout. As such, protectionism today thrives on geopolitical fault lines and may not fit coherently within broader economic policy. In this regard, there are three points to consider: traditional protectionist measures, modern 21st century additions and the ‘geopoliticisation’ of economic policy overall.

First, traditional protectionist measures increase the cost of global trade. At a minimum, trade barriers raise transaction costs. Given that protectionism today will be geared towards reshaping major trade channels, this increase will be cumulatively meaningful and as such should deter global trade growth over time. Figure 1 illustrates that this has already begun to happen in a modest way in the post-2008 financial crisis period. Expect this structural decline to continue and the stimulative effect of world trade on industrial production to fade in coming years. In other words, one source of global growth will weaken further. 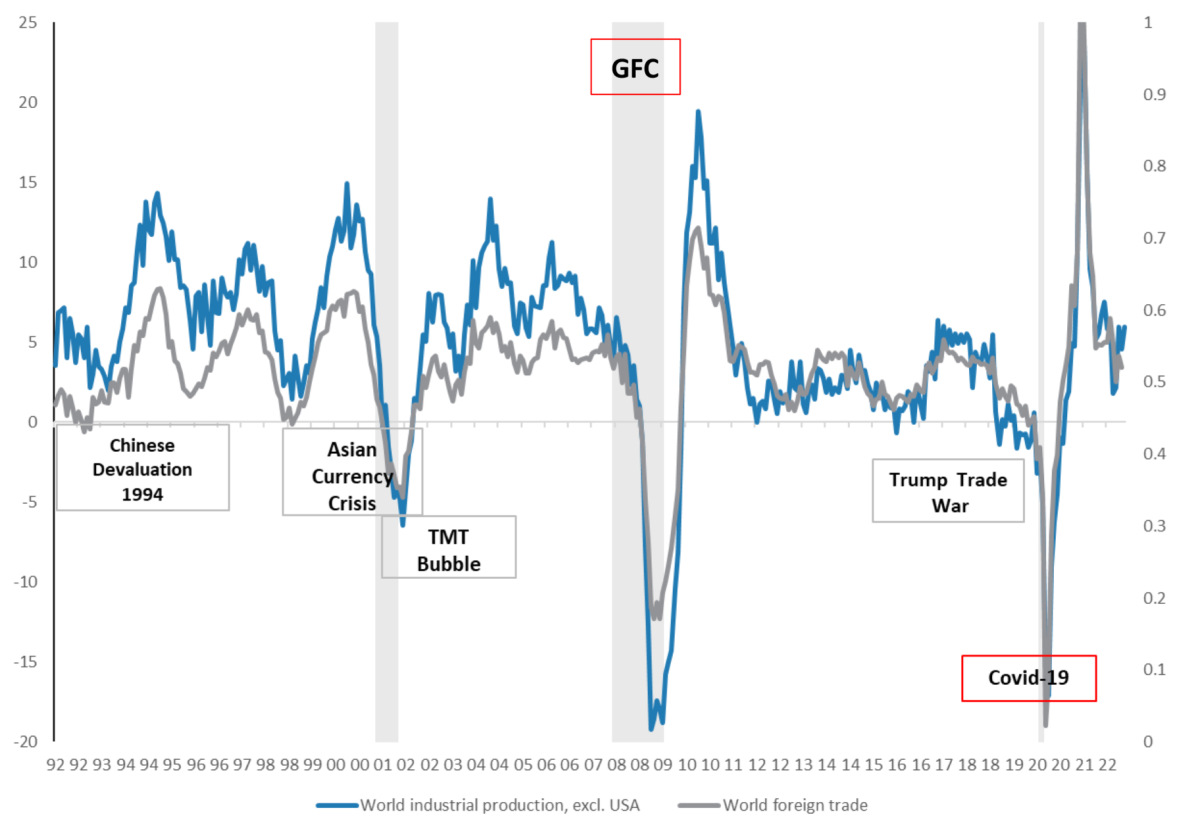 In addition, this smaller trade growth comes from fewer or costlier trading opportunities. The global market is shrinking for many companies and this constitutes a loss of market access. This is the explicit goal of many protectionist measures today, which is to close off certain markets to domestic or foreign corporations. The impulse is largely geopolitical, but domestic industries will increasingly seek protectionist policies to lessen competition, so there is a risk of re-integrating outdated protectionist trends into mainstream economic policy.

The offset and corollary here is the active promotion of re-industrialisation of parts of the developed world or its geopolitical allies. The narrow definition of reshoring is misleading. Yes, reshoring parts of goods production back to developed markets is a target. And yes, we can already find initial signs of success in reversing a decades-long trend. Figure 2 shows how reshoring in the US has accelerated materially, albeit from very low levels. Although at a multi-decade high, such numbers will remain macroeconomically insignificant for the US given high levels of automation. Instead, it is the broader view of reshoring as ‘aligning economic production with geopolitical alliances’ – what US Treasury Secretary Janet Yellen has termed ‘friend-shoring’. The macroeconomic impact could be greater over time as it enhances individual countries’ competitive advantage, even if it lowers the efficiency of the global value chain.

Unless there is a big productivity boost, this should also be inflationary given that the share of wages rises. Less understood is how much this wage effect in one sector can affect other industries. Globalisation and the decline of manufacturing in the West released surplus labour from a higher-wage sector into lower-wage sectors, helping to depress wages across the wider economy. This reversal and sudden demand for higher skilled labour will lift wage pressures more broadly than otherwise. In short, deglobalisation is inflationary in more ways than one. 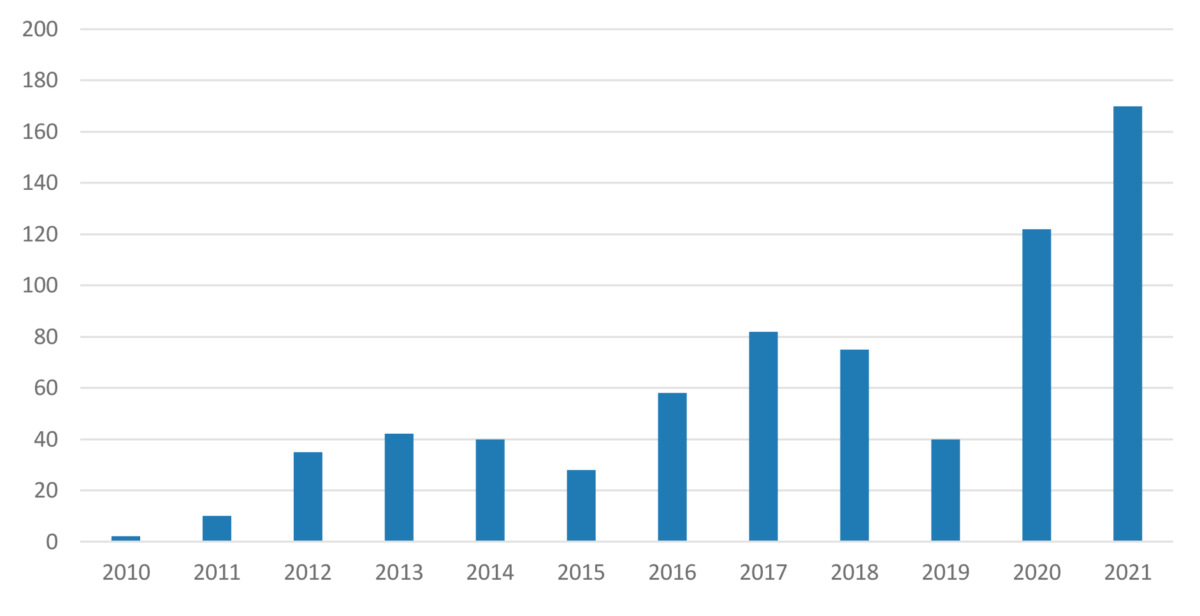 Second, protectionism traditionally was limited to cross-border trade. Today it also encompasses cross-border capital flows and other regulatory measures. These interventions in the free flow of capital can even be more distortionary than trade barriers. Due to the globalisation of finance over the past 20 years, global capital flows operate under a patchwork of national rules without any harmonised global standards. Thus, this form of protectionism is more explicitly geopolitical in nature. Clear examples of this are recent US actions on Chinese-listed equities or the consideration of creating a governmental review committee for external foreign investment. These are likely to be mirrored elsewhere too. However, in contrast to conventional protectionist measures, these interventions are less transparent and carry unintended consequences. Trade protectionism leads to trade diversion and typically a lower consumer surplus, but capital distortion could lead to capital misallocation in less predictable patterns.

The audit requirement for US-listed Chinese equities was based on investor protection principles. While in this instance there are genuine gaps in the regulatory protection, this need not apply to other regulatory areas where innocent rules around standardisation or safety could easily be tilted for protectionist purposes.

Finally, the above trends channel geopolitical competition into all areas of economic competition. All policy levers that enhance competitiveness at the expense of geopolitical adversaries form part of the toolbox. The US and its allies would claim that this defines China’s entire economic model, which is to use all powers of the state in service of the country’s development, in defiance of fair trading norms and at the expense of its trading partners. This underpins the justification for an expansive re-definition of industrial policy in the West. The big increase in public investment in high-value-added industries such as semiconductors appears to mirror past Chinese policies. Combined with protectionist measures in those industries, western countries are likely to build up overcapacity similar to excess Chinese capacity.

Most dramatically, the blurring is affecting climate change efforts. The energy transition and adaptation to climate change are deeply intertwined with geopolitical competition. This is both due to the fact that leadership in electrification and digitisation derives from similar sources, as well as the fact that low-carbon economies are likely to be more competitive in the coming decades. Consequently, climate policy in all domains has a geopolitical overlay that complicates international co-operation. It will become an increasing source of discord but, more importantly, another area where the geopolitical interests of the US and Europe are more aligned than with China.

Not all of these protectionist tendencies are necessarily negative. For instance, dependency on rare earths imports from China led to a western supply response, lowering China’s share of global rare earths production to around 66% in 2021 from over 95% in 2011. And similar to how infant industry protection helped build successful industry clusters in emerging markets, today’s protectionism could help foster innovation in capital-intensive areas where private capital needs public policy backing to succeed, with semiconductor industry being the textbook example.