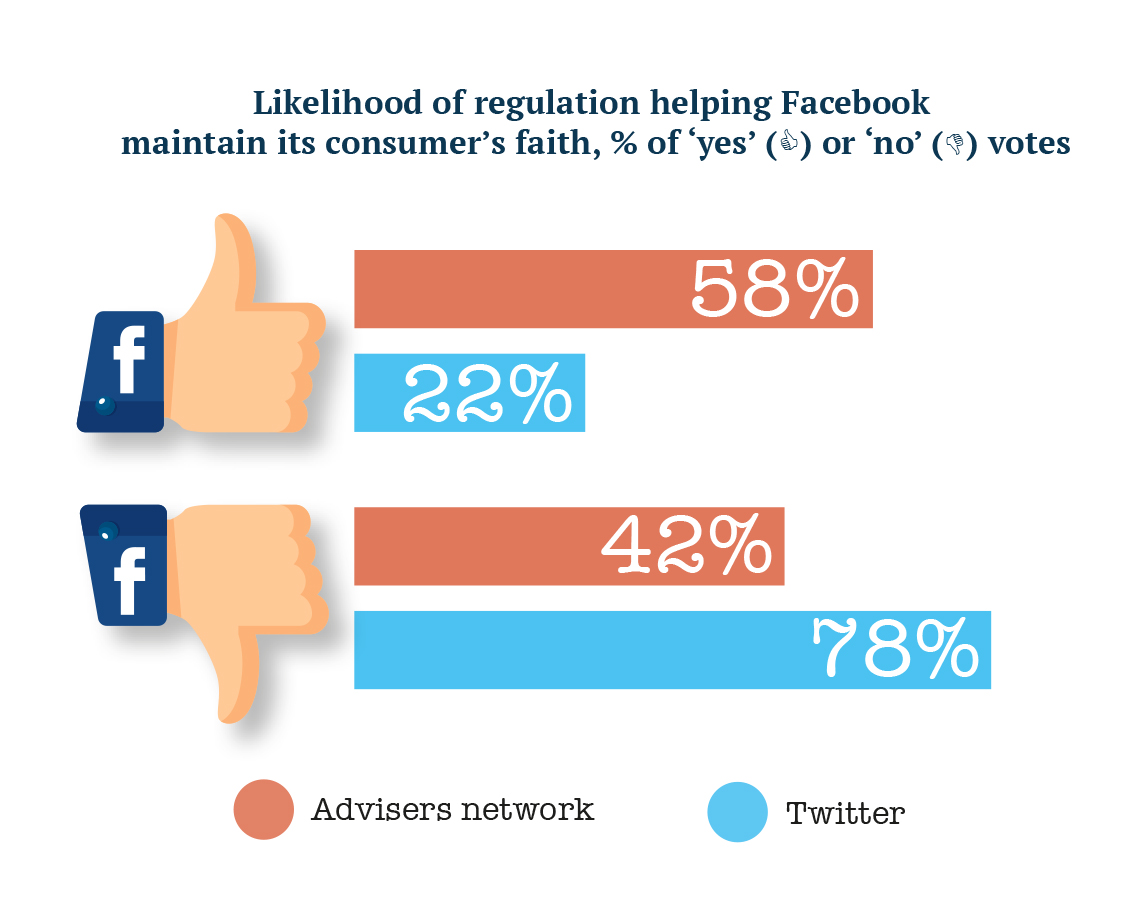 The poll for this month focuses on the revelations that user data was withheld from Facebook users without their knowledge. Participants were asked: ‘With Facebook’s recent data leak, is the promise of greater external and internal regulation enough to maintain consumer faith in the company?

There was a split of opinion from those who responded to the advisers network poll, with 58% saying ‘yes’ and 42% ‘no’. Reasons supporting continued user confidence in the company included factors such as consumer apathy towards data as a whole. Reasons against included the expectation of regulation having little effect. Many agreed, however, that Facebook had ‘misused’ its position, and that the situation had presented a ‘strong case for regulation’. However, whether the controversy would have any lasting detrimental effect on the company was questioned.

The Twitter community was more confident in its opinion that faith in Facebook would be knocked, by 78% to 22%. Perhaps this was influenced by the poll being hosted on one of its social media competitors.

‘Incoming regulation will be irrelevant to the way consumers see Facebook. No matter what actions are taken, confidence is shaken, but at this stage probably not too severely.’
Olivier Rousseau, Fonds de réserve pour les retraites

‘Many people will still use Facebook despite their lack of trust in the company, because they think the data related to them are not that important or sensitive.’
Philippe Lagayette, formerly Banque de France

‘As long as there are no real alternatives, consumers will stay with Facebook. There have not been any direct consequences of the leak for individual Facebook users.’
Jens Thomsen, formerly Danmarks Nationalbank

‘Enough will be done to ensure that the consumer continues to use Facebook, though with a fall in profitability.’
Colin Robertson,
SW1 Consulting

‘While regulation can help, it cannot compensate for a business model that sells data without consumer permission.’
Irena Asmundson, California Department of Finance

‘As digital platforms can be misused, there is certainly a strong case for regulating social media.’
Hemraz Jankee, formerly Bank of Mauritius