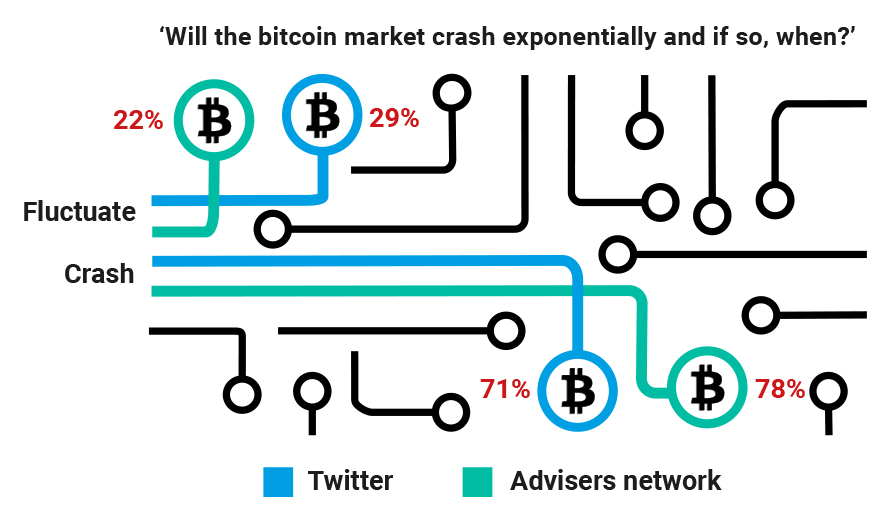 The poll for this month focuses on the future of bitcoin. Participants were asked: ‘Will the bitcoin market crash exponentially and if so, when?’

Of those who responded to the advisers network poll, 78% agree there will be an exponential crash compared to 22% who say that prices would fluctuate.

However, within the timeframe of the poll a major drop in bitcoin price occurred. Subsequent answers took this on board, with many suggesting the crash had already begun.

The question was also opened up to OMFIF’s Twitter network for the first time and respondents came to a similar conclusion, 71% to 29%, that the market would fail, though this poll closed before bitcoin’s significant decline in value.

The following statements were received as part of the January poll, conducted between 10-22 January, with responses from 18 advisory network members and 38 Twitter users.

‘The bitcoin crash is already underway as it does not have real values justifying its existence, due to the currency being just a — absolutely brilliant — product of imagination, along with the measures being taken in several jurisdictions forbidding its use.’

‘I really think a crash is inevitable as bitcoin’s value is not based on anything fundamental.’

‘No it will not fall exponentially, at least not this year.  With apologies to Keynes “The price of bitcoin can stay irrational longer than you can stay solvent.”’

‘We are already witnessing a burst in the bitcoin bubble in 2018. There is need of official recognition of this cryptocurrency phenomenon in order to have more market stability and confidence from investors.’

‘The market should crash within the next two years. It is a shame the monetary, regulatory and political sectors let these speculative assets freely undermine the overall market economy.’

‘The bitcoin market is a classic case of a bubble and will
therefore crash soon.’