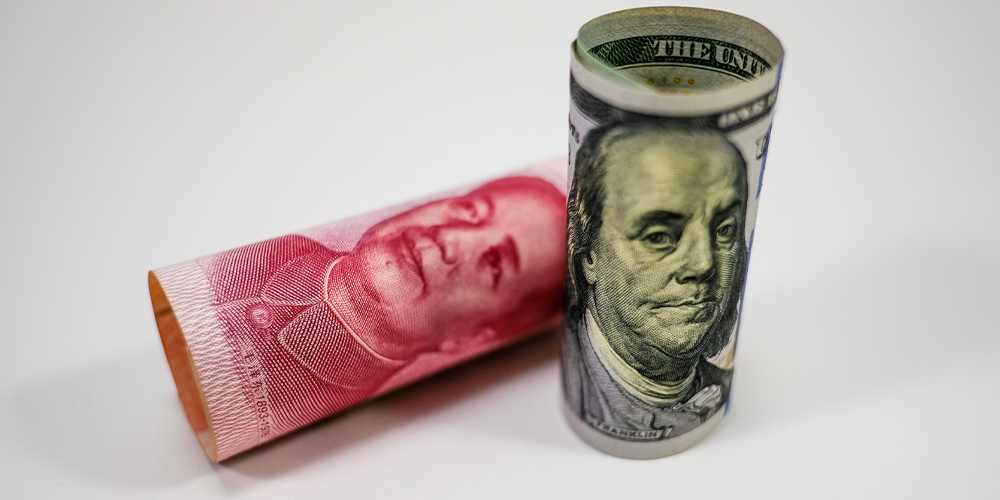 China is not seeking a trade advantage, but mind the capital outflow

Since mid-April, the renminbi has fallen sharply against the dollar in the order of 4% – the biggest renminbi move against the dollar since 2015. This depreciation has raised questions over whether China is seeking to gain trade advantage to offset economic weakness. A more relevant question is whether prolonged capital outflow could be triggered.

It would be premature to draw a conclusion that China sees renminbi weakness as an answer to a softening economy. This move is heavily influenced not just by developments in China, but also in the US and globally.

First and foremost is the shift in US monetary policy, including sharp increases in US rates which have eliminated differentials with renminbi bonds. For example, the US Treasury 10-year rate has risen by nearly 150 basis points this year, while China’s government bond yields have remained largely flat.

Looking at exchange rate movements more generally, the dollar is up across the board since the beginning of this year. It’s up by roughly 13% against the Japanese yen and over 7% against the euro. It’s up much less against the renminbi.

The People’s Bank of China in recent years has increasingly focused on broad stability in the renminbi’s trade-weighted basket, rather than the dollar, which has a modest roughly 20% weight in China’s basket. If the dollar is rising against all currencies including the renminbi, then it is also rising against other trading partners of China.

Broad stability on a renminbi trade-weighted basis would imply renminbi appreciation against China’s trading partners. That trend is borne out in the China Foreign Exchange Trade System’s renminbi index, which in late April showed that the trade-weighted renminbi was still slightly up so far this year (Figure 1).

China’s economic outlook is weakening. It will be more heavily impacted by fallout from Russia’s heinous invasion of Ukraine than the US. In addition, the housing sector’s troubles and the recent outbreak of Covid-19 cases and lockdowns in key Chinese cities will cut into growth. The International Monetary Fund just slashed its 2022 Chinese growth estimate to 4.4% in the April World Economic Outlook, down 1.2 percentage points from its October 2021 projection.

China is expected to run a current account surplus in the order of 1% of gross domestic product this year, down from nearly 2% in 2021. Last year, the renminbi was supported in part by capital inflows associated with the inclusion of the renminbi in global equity and bond indices, as well as higher government bond yields offering a good nominal return in contrast with low or negative rates elsewhere.

This year, China has experienced massive capital outflows, not only due to the above considerations but perhaps because investors are wary of Chinese ties to Russia, given the strength of western sanctions against Russia and President Xi Jinping’s ‘no limits’ friendship with Vladimir Putin.

China’s growth slowdown is impacting Chinese risk assets in general, not just the renminbi. The Shanghai composite equity index is down by more than 15% this year.

The authorities are seeking to support risk assets, albeit cautiously. In March, the State Council announced it would support the country’s capital markets. China also decreased its foreign exchange reserve requirements in an effort to increase the supply of dollars into the market and prop up the renminbi.

That said, a more difficult question is whether recent developments could be a harbinger of another massive and persistent period of capital outflow. China witnessed massive outflow in 2015-16, in the order of nearly 4% of GDP in each year, mainly owing to ‘other investments’ and ‘errors and omissions’, not portfolio outflows.

At the time, market participants, seeing that renminbi appreciation was no longer a one-way bet as it had been in prior years, massively reversed course. Notwithstanding the tightness of Chinese capital controls, capital account leakage can be significant and there is a long history throughout emerging markets of economic actors finding workarounds to capital controls. China drained $1tn in reserves to withstand these pressures in 2015/16, an experience the central bank has little appetite for repeating.

On balance, there are reasonable fundamental explanations for the renminbi’s weakness as well as indications the authorities are not seeking to promote renminbi depreciation as a means of gaining competitive advantage or mitigating the slowdown. However, capital account developments could prove turbulent, despite the authorities’ wishes. Mind the capital outflow.