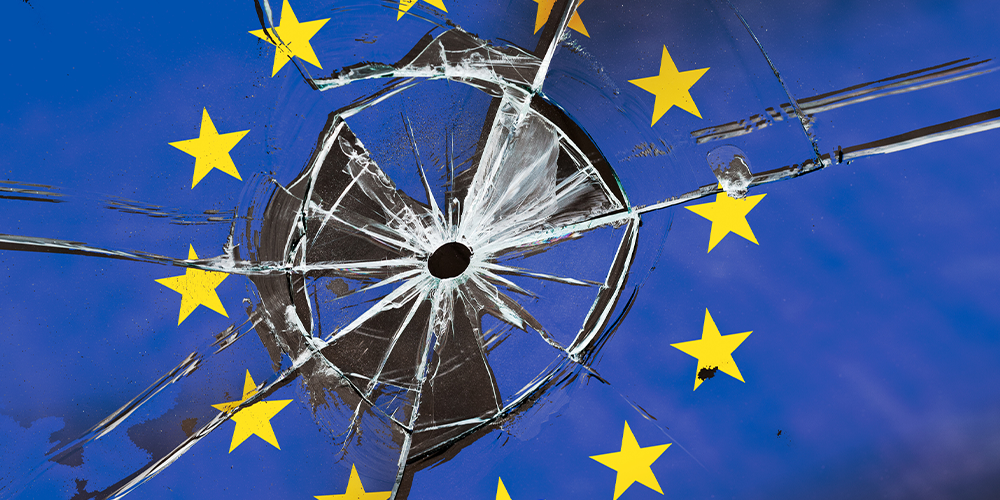 Quantitative easing helped but it’s not the solution

Before Covid-19 and the Russian invasion of Ukraine, the worst of the euro area’s macro strains looked to be behind it, as the lagged effects of ultra-low bond yields (we’ve had seven years of quantitative easing) flowed through to confidence and higher loan demand. But, while helpful in addressing the main symptom, deflation, the combined monetary loosening of Mario Draghi, former European Central Bank president, and Christine Lagarde, the current ECB president, should never have been expected to solve the underlying problem – a monetary union devoid of economic union. Resolving this will take years.

There are hawkish forces at the ECB and the 10 March decision to step up the pace of monetary ‘normalisation’ was an uneasy compromise for some. The get-out, for now, is that the end of QE was always meant to be flexible, dependent on both data and events. But, with one ‘monetary glove’ still not fitting all 19 members’ hands and their central banks’ support of growing bond supply likely to fall, quantitative tightening – when it comes – could end up being less intense and shorter-lived than many expected.

OMFIF’s competitiveness analysis shows the progress so far (see chart). It uses the OECD’s estimates of a country’s unit labour costs in all goods and services, relative to those of its main trading partners (the average is weighted and indexed to a 2015 base year). A rising index indicates a de facto real effective exchange rate appreciation and falling competitiveness.

First, as an amorphous bloc, the euro area has, after a decade of austerity, been regaining the competitiveness it lost with the single currency. Only part of this can be laid at the weaker euro’s door. The area’s costs between 2000-09 rose 19% relative to its trading partners, compared with falls of 22% and 34% in the US and UK. Yet, since austerity started in 2010, its costs have fallen back 3%, beefing up a current account surplus that was helped by the low price of oil. This beats a currency-induced rise of 22% in the US and 9% in the UK. The challenge, given the oil price surge and potential supply disruption from Russia, will be sustaining this relative advantage for euro area exports. 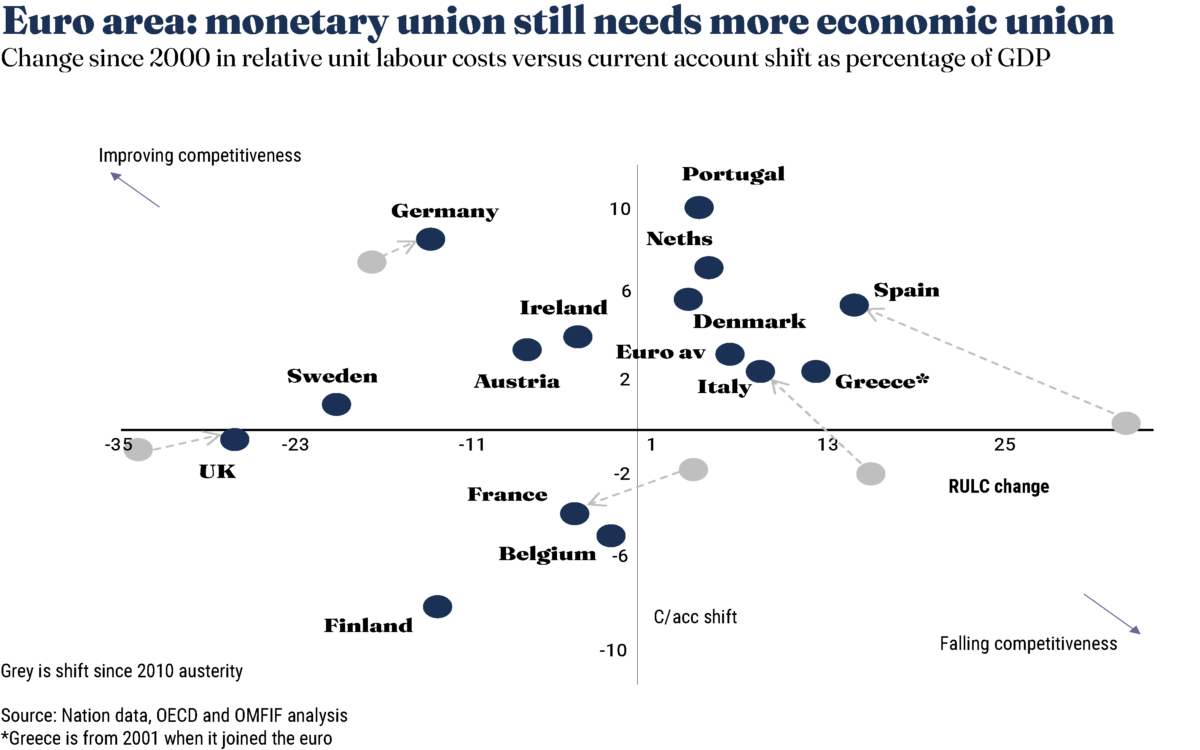 Despite this overall improvement, shifts in individual members’ competitiveness are still too disparate to rule out further macro and market strains down the line. These could be exacerbated if monetary stimulus is removed aggressively. The chart shows the absolute shifts by country since 2000. With the currency devaluation escape route closed off, the deciding factor has been whether members undertook the internal cost adjustments needed to boost competitiveness, gross domestic product and tax revenue.

On this basis, Germany remains one of the biggest winners. It saw its unemployment rate rise to over 11% in 2005 from under 8% in 2001. But, in competitiveness terms, this reaped dividends and cost control translated into current account improvement.

By contrast, most other members have experienced a net deterioration. Because of its adjustment, Germany has managed to cut its RULC by about 13%. But countries on the right of the chart saw theirs climb. Up to 2010, Spain and Italy’s competitiveness deteriorated fastest. Ireland and Greece had to suffer deflation to ‘improve’ their relative position.

However, Spain and Italy have seen their deterioration correct rapidly, aided by ultra-low rates and QE, and their shortfalls against Germany reduce. Spain eventually managed to turn painful austerity and support for banks into a much improved external position, recording its first surpluses since the mid-1980s. The grey blobs in the chart highlight the 2000-10 period, showing progress since austerity. The estimates to 2020 in blue thus suggest improvement. Outside the euro area, meanwhile, the UK, since 2000, has outperformed it through sterling depreciation – an avenue closed to euro members.

But competitiveness improvement can come at significant economic and social cost. Deflationary Ireland in 2009-10 suffered the vicious circle of bloating real debt, lower ratings, higher funding costs and recession, exacerbating deflation. After strong gains, there’s a limit to how far Spain, Italy and Greece can continue to reform, given high male youth unemployment (historically associated with social unrest) and disproportionate Covid-19-induced hits to growth from tourism. These disparate effects from Covid-19 are rightly being recognised by senior ECB governing council advisers.

Telling will be if IG Metall, Europe’s largest trade union, can further improve its previous wage settlements (an average 2.3% annual increase since 2018) and 28-hour workweek to aid convergence, this time from Germany’s side. If not, this gives extra credence to the calls for Germany and those others with ‘fiscal space’ to take up the baton as the ECB tries to normalise monetary conditions. After sizeable Covid-19-induced stimulus packages, though, fiscal repair may be higher on most governments’ priority lists.

Tackling the euro area’s underlying problem needs more than quantitative easing. Its effectiveness hinged on capping long rates and, with roughly two-thirds of private borrowing (personal and corporate) long rate driven, stimulating demand. Yet, the risk of stagflation undoing that suggests QT may have to be gentle and drawn out, even with more hawkish ECB members.