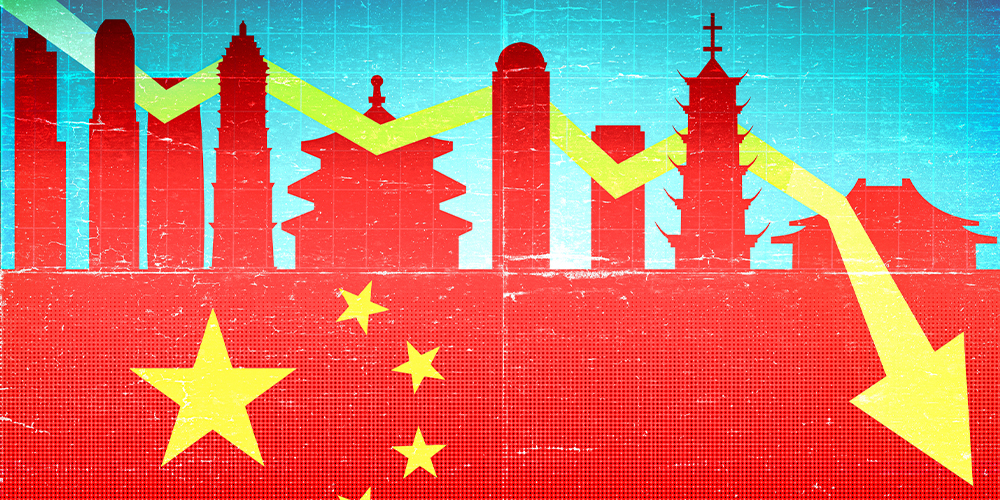 While similar, this is not another Lehman Brothers moment

The collapse of Lehman Brothers helped trigger the global financial crisis. Evergrande is not a Lehman moment, given that China is not the epicentre of the global financial system. But both Lehman Brothers and Evergrande rode a wave of liquidity created, in part, by Chinese excess savings. That doesn’t let the managers and regulators of these companies off the hook. Rather, it reveals how they were both able to rise so far and get away with it for so long.

Excessive savings facilitate lending that would not otherwise exist. China’s excess savings have driven successive deficits across the world. Before 2011, the renminbi’s undervaluation allowed China to export its savings. The first foreign balance sheet to ride high and then come a cropper on Chinese surpluses was the US household sector, culminating in the subprime crisis. After this, the US government briefly stepped in, but that then became politically unacceptable.

Emerging markets followed, but it was clear that they were nowhere near large enough. The result was 2013’s taper tantrum.

Even the Chinese corporate sector eventually hit the wall. From 2016, Chinese households took up the challenge. The attempts of Chinese corporates to improve financial balances meant there had to be a deterioration somewhere. The Chinese household balance sheet was the last to liquify excess savings, making it possible for Evergrande to continue behaving badly. This liquidity helped ensure that property prices kept rising, allowing developers to continue borrowing and bidding up land prices.

In November last year, authorities instigated three red lines: limits on corporate ratios of debt-to-assets, debt-to-equity and cash-to-short-term-debt. Effectively, they forced liquidity-dependent firms to go cold turkey. M1 growth has slowed sharply. Gross domestic product growth in 2021’s third quarter is set to be weak, with fresh Covid-19 restrictions exacerbating the pain. This combination has been enough to derail Evergrande and others.

The web around Evergrande and other developers is complex, with holders of property assets peppered across the economy. Preventing distress from spreading will be difficult and decisive early action is paramount. The only reason why contagion hasn’t spread yet is that the People’s Bank of China is supplying large injections to the interbank market. But the system will need a more permanent injection of liquidity. 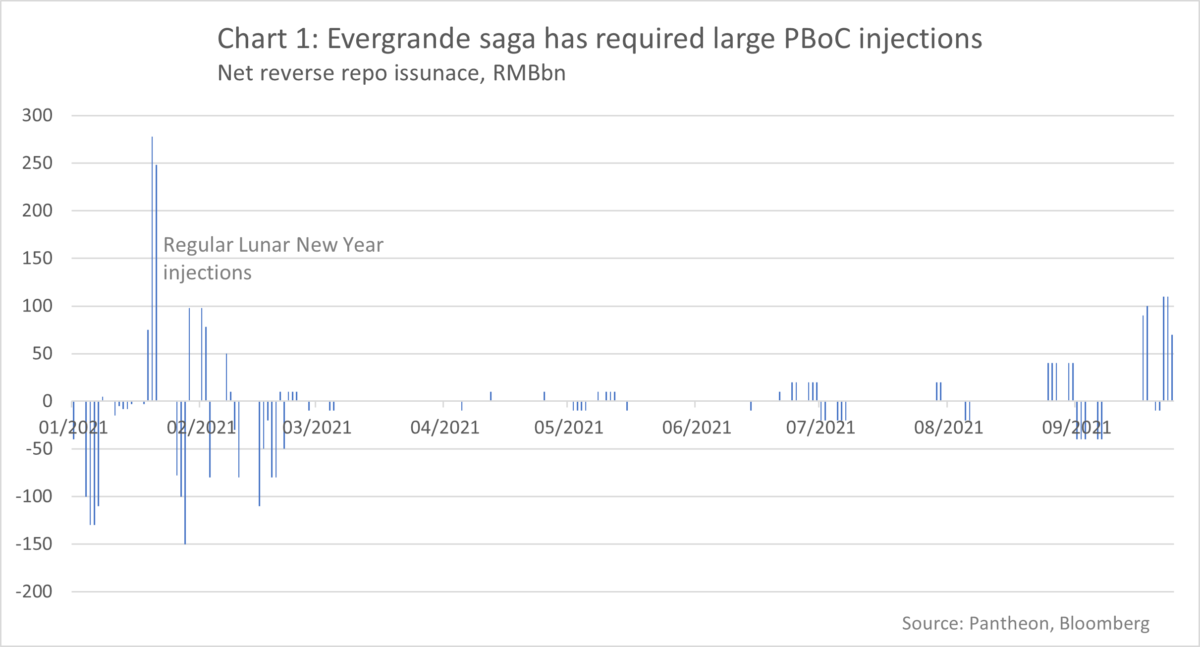 Banks would also have to be corralled into lending to property developers again. Suppliers and employees paid in receivables will have to be bailed out, to prevent them from dumping assets and creating a downward spiral in prices. The worse it gets, the more likely it is that the authorities will have to take on recapitalising the banking system.

There is a distinction between the current situation and the subprime crisis. International financial exposures are less severe. But the relatively modest direct exposure of major asset managers to Evergrande’s offshore bonds understates the problem. As this question of exposure builds, so too will uncertainty. Authorities could funnel dollars to the problem. But China’s foreign exchange reserves aren’t what they used to be, having fallen to 19% of GDP in Q2 of 2021 from 37% in 2015. Thankfully, dollars remain plentiful globally, due to the pandemic policy response.

The implication for international investors either way is that the renminbi must depreciate. The question is over timing. There are no balance sheets left within China, meaning surpluses will seek foreign ones again, requiring a cheaper currency. Or to put it differently, GDP growth has hit a wall, and differentials were already pointing to a depreciation around the end of this year. 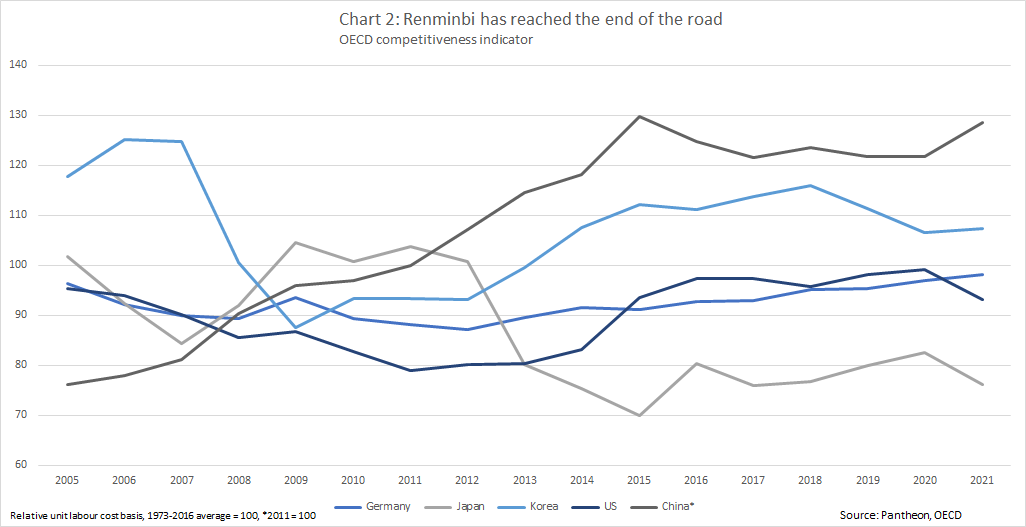 The PBoC is already pumping in liquidity and it will have to put in more before this Evergrande saga is over. If foreign exposures and related uncertainty are more significant than expected, then pressure on the currency could become severe. At this stage, data to confirm exposures probably don’t exist. That could become part of the problem.

China’s property market is broken, removing a key demand driver. In the medium term, the route to net zero will still dominate commodities prices, providing an internal source of demand for China, and limiting the need for renminbi depreciation. For global equities, the best scenario is that China-related earnings are a major drag on global stocks, at a time when valuations already look stretched.

So far, the time horizons here involve the next one or two years. But reaching the last balance sheet is more momentous than that and raises serious questions about where the global economy goes from here. It’s possible that Chinese households will not be the last balance sheet to leverage up in the sense of equity becoming a more important form of finance. They may even have room to leverage up in the next cycle. At the same time, China’s monumental need to green the economy could use up more of those excess savings domestically.

The slowing of global growth in each cycle, however, alongside rising inequality and hollowing out of middle incomes, has reached a political impasse. Developed market policy design for the seventies has given way to recognition of a need for infrastructure investment, financed by government debt if necessary, which in turn could help unleash private capital expenditure, and productivity rebound. Let’s hope that China’s woes are not too great, as dollar appreciation would be a major drag on this GDP growth renaissance.